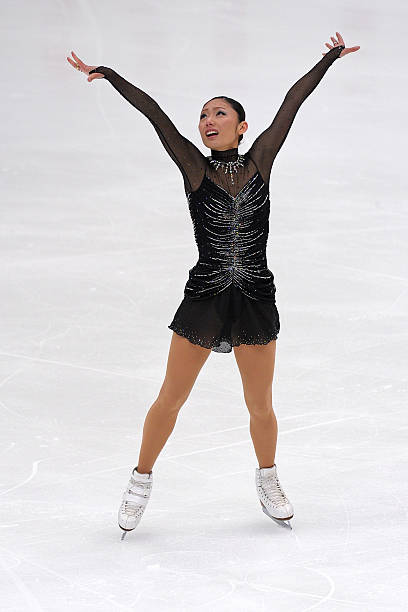 What would you have given to become an Olympic athlete?  One famous Japanese figure skater knows what she wouldn’t give.

The skater is gliding gracefully across the ice in a bright red costume, holding her arms aloft.  Skating backwards now, Miki Ando of Japan is preparing for a huge jump: A quadruple Salchow.  And she lands it!

The audience explodes with delight.  But a few years later, the applause went silent when the two-time Olympian became pregnant— and refused to have an abortion.

Miki Ando landed that quadruple Salchow— the only female skater ever to do so in competition— at the Junior Grand Prix figure skating finals at The Hague in 2002.  She took part in the Olympic Games in both Turin and in Vancouver, representing Japan— a country where figure skating is insanely popular.  And she’s a two-time World Champion.

Four years ago, Ando was preparing for a spot on the Olympic team for the Sochi Games when she made a shocking discovery:  She was pregnant.  And now she had a hard decision to make.  She considered having an abortion.  Competitive skating was her life; having a baby meant missing months of practice.  And in Japan it’s considered shameful to have a baby out of wedlock.

As Ando later recalled, “I could not make up my mind all the way, but I hated to make a decision to say goodbye to the baby.”

In the end, she announced: “I have chosen the baby’s life over skating.”

When news broke of Miki’s pregnancy— and of her decision to give birth— the Japanese public was furious.  Their quad-jumping champion was now told she was setting a bad example.

“Honestly,” Miki told Kristi Burton Brown at LiveAction.org, “98 percent of the people said I was so bad.”

But her critics were forgotten when, in April of 2013, Miki gave birth to a little girl she named Himawari, now an adorable almost-five-year-old in pigtails.  Her mother takes her with her to skating events, and when she cannot, Himawari’s grandmother cares for her.

Would Miki have won a spot on the Japanese Olympic team four years ago if she had aborted her baby?  It’s hard to tell; many factors are involved.  In any case, she has no regrets.  Miki is now a professional figure skater, coach, and television personality.  And as she told a Japanese website, the sight of her daughter’s face makes her want to do her best.

Miki is sending a vital message to women of the Western world:  that babies and careers are not mutually exclusive.  Sadly, women are often told from early childhood how important it is to have a career— that they should put off childbearing until they have finished college and gotten a good start on their careers.   Men, also, are told to put off marriage and fatherhood and focus on making money.  But babies tend to show up when they want to, regardless of our plans, and couples are often put under pressure to abort.

Miki’s story is proof that life doesn’t end with the birth of a baby— and that their appearance, even if seemingly ill-timed, can become a great joy.  And as Kristi Burton Brown pointed out at LiveAction.org, the message that women must choose between career and motherhood “is harmful.”

And as for the Olympic medal Miki might have won, she notes that “No one is guaranteed the successes they most covet— no matter how much or who they sacrifice in the name of the success they crave.”

Deuteronomy 30:19-20a  —  This day I call the heavens and the earth as witnesses against you that I have set before you life and death, blessings and curses.  Now choose life, so that you and your children may live and that you may love the Lord your God, listen to his voice, and hold fast to him.  For the Lord is your life.

Psalm 139:13-14  —  For you created my inmost being; you knit me together in my mother’s womb.  I praise you because I am fearfully and wonderfully made; your works are wonderful, I know that full well.

A MOTHER’S PRAYER DURING PREGNANCY:

O Lord God Almighty, who hast made us out of nothing, and redeemed us by the precious blood of thine only Son; preserve, I beseech thee, the work of thy hands, and defend both me and the tender fruit of my womb from all perils and evils.  I beg of thee, for myself, thy grace, protection, and a happy delivery; and for my child, that thou wouldst preserve it for baptism, sanctify it for thyself, and make it thine forever.  Through Jesus Christ, thy Son, our Lord.  Amen.

797) Prayers for Living the Christian Life