By Randy Alcorn, excerpted from his book:

If God Is Good: Faith in the Midst of Suffering and Evil.

Seeing positive outcomes of some suffering should lead us to trust that God can bring good from all suffering.  Consider three people who through suffering became extraordinary.

Doctors once thought that Joseph Merrick, “The Elephant Man,” had elephantiasis, though now they believe he suffered from Proteus syndrome, which causes abnormal growth of bones, skin, and other systems.  Joseph was born in England in 1862 and appeared normal until age three.  By age eleven, his deformities had grown severe.  At that time his mother died, and later his new stepmother kicked him out.

He became a door-to-door salesman but suffered constant harassment.  His condition worsened: protruding, cauliflower-like growths appeared on his head and body, and his right hand and forearm became useless.  No longer able to do physical work, he took a job as a curiosity attraction.  After a promoter robbed and abandoned him, he returned to London and visited Dr. Treves at the London Hospital, where he received permanent living quarters.  Despite his adversities, Joseph Merrick remained cheerful and gentle, and never grew bitter.  He found comfort in writing, including poetry.  He died at age thirty-seven.

Merrick often ended his letters of thanks with a poem, and then a couple lines from by hymn-writing theologian Isaac Watts: “’Tis true my form is something odd; / But blaming me, is blaming God…. / I would be measured by the soul; / The mind is the standard of the man.” 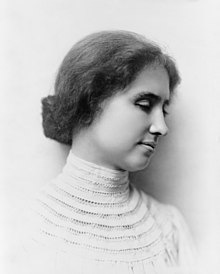 Helen Keller was born in Alabama in 1880.  A year later, illness took her vision and hearing.  At age seven, her parents hired Anne Sullivan, whose innovative tutoring transformed Helen’s life.  Helen learned to speak at ten, and though listeners had trouble understanding her, she never gave up.  She attended college and wrote several books, including The Story of My Life.  She devoted herself to research, speaking, and raising money for organizations such as the American Foundation for the Blind.  Helen traveled the world on behalf of the blind and visited thirty-five countries.  At age seventy-five, she embarked on a five-month-long, forty-thousand-mile tour through Asia, bringing encouragement to millions.

Christy Brown was born in Dublin in 1932.  His cerebral palsy caused everyone to consider him mentally handicapped until he used his left foot to grab a piece of chalk from his sister.  His mother taught him to read and write.  Well into adolescence, he could not speak intelligibly.  He wrote an autobiography titled My Left Foot as well as several other novels and poetry collections.  He typed using only his left foot.  People loved Christy Brown for his warm and cheerful personality.

These stories don’t prove that God always brings good out of evil in this life.  But they do prove that He sometimes does.  Shouldn’t that give everyone hope?

Romans 5:1-5  —  Therefore, since we have been justified through faith, we have peace with God through our Lord Jesus Christ, through whom we have gained access by faith into this grace in which we now stand. And we boast in the hope of the glory of God.  Not only so, but we also glory in our sufferings, because we know that suffering produces perseverance; perseverance, character; and character, hope.  And hope does not put us to shame, because God’s love has been poured out into our hearts through the Holy Spirit, who has been given to us.

We beseech you, O Lord, to enlighten our minds and to strengthen our wills, that we may know what we ought to do, and be enabled to do it, through the grace of your Holy Spirit, in the name of your Son Jesus Christ.  Amen.