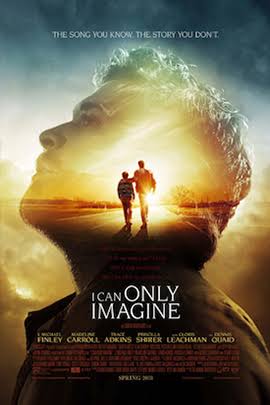 I Can Only Imagine is a must see movie that was released in March.  You can still see it in some theaters, or watch for its release on DVD or Netflix.  The following is from a review on the Plugged-In website produced by Focus on the Family.  I will let the review tell the story, but do keep in mind Plugged-In for excellent movie reviews from a Christian perspective.  The web address is:

Every song tells a story.  But sometimes the story behind a given song is more dramatic than the song itself.

That’s the case with “I Can Only Imagine,” the 2001 MercyMe song that surged seemingly out of nowhere to become the biggest-selling Christian single of all time.

But “I Can Only Imagine” didn’t come from nowhere.  And even though that band’s frontman, Bart Millard, scribbled out the tear-jerking tune about being with Jesus in heaven in just a few minutes one emotion-filled night, its inspiration was a lifetime in the making.

It’s 1985 when we first meet young Bart Millard as he works in his grandmother’s yard, rides his bike through town, and makes a Star Wars-inspired helmet out of cardboard.  Bart seems a carefree, imaginative kid.  A nice kid.

His father, Arthur?  Not so much: “I’m gonna teach you something, Bart.  Dreams don’t pay the bills.  Nothing good comes from it.  All it does is keep you from all this,” he says, waving his hands around at their rural home in Greenville, Texas, “from knowing what’s real.”  And with that, he picks up Bart’s helmet, takes it out to the garbage barrel that’s already burning with trash, and tosses it into the flames as tears stream quietly down Bart’s cheeks.

Arthur’s reality isn’t just informed by the rolling Texas hills.  It’s distorted by his own broken dreams of being a professional football player.  Those disappointments shattered his soul, and he has no time for the dreams of others.  Now he spends his days as a mechanic, his nights verbally and physically working out his bitterness on his wife, Adele, and poor little Bart.

Soon Adele ships Bart off to church camp, where he meets a young girl named Shannon who’s quite taken with him.  When Bart returns home after a spiritually transformative week, however, his mother has gone.  Abandoned him to a father who growls more than he speaks, one who’s more prone to hit than hug.  “Mom left,” his dad says simply.  “Just you and me now.”

And so it is.  It’s a sad fate for a boy, a tender dreamer being raised by a man whose dreams are dead.

But Bart strives mightily to earn his crusty father’s approval anyway, notably by playing football in high school.  But when a terrible tackle breaks both of Bart’s legs, the teen’s sole path to pleasing his father smacks into a dead end.  In the hospital, he asks his father about his injuries: “What’d they say?”

“Yeah, it is,” his dad says, and walks out of the hospital room.

In the weeks and months that follow, though, Bart makes a surprising discovery—one that he hides from his father:  He can sing.  That undeniable talent eventually leads him to pursue a career in music, following his heart, following his dream.

But in the back of his mind, his father’s voice echoes like a poisonous curse:  “Dreams don’t pay the bills,” it whispers.  And when Bart, now the lead singer of a band called MercyMe, hits a crisis point, he knows he has to return home and confront unfinished business with his father.

The man he discovers there is not the one he expected to find.  In fact, he’s become someone Bart never could have imagined…

Much of Bart’s journey is closely intertwined with his faith—sometimes growing, other times receding.  But his hard-but-redemptive story is one that many who’ve struggled through painful family dysfunction will likely identify with.

Arthur truly is a broken shell of a man.  And for much of this story, the only perspective we see of him is how that soul-sapping disillusionment with life eats away at him and makes him an ill-tempered, angry bully.

That’s not good, obviously.  But the film does realistically depict the consequences of that emotional brokenness, namely his wife’s abandonment and Bart’s deep personal wounds.  Bart spends much of the film coming to terms to with how badly his father hurt him.  But, with the encouragement of the band’s manager, a Nashville insider named Brickell, Bart decides to return home to try to mend his relationship with his aging father.

Things aren’t easy when Bart gets back, on many levels.  But he finds Arthur a changed man, and he’s forced to decide whether he can really forgive his dad for the lifetime of pain that he’s inflicted upon his son.  Near the end of his life, Arthur offers Bart a remarkable blessing, saying, “I told you not to follow your dreams, but that’s only because mine never came true.”  Then he tells his son that he’s been saving money and has a life insurance policy that should sustain Bart while he pursues his musical career.  “And I want you to have that so you can pay attention to your singing.  And you’ll get a check every month.  So you can chase your dream.  And I want you to catch it.  Don’t you ever look back.  You promise?”

Elsewhere in the film, various characters respond to Bart with patience and grace, even when he’s acting like a self-centered hothead.  These include his on-again, off-again, on-again girlfriend, Shannon; his surly-but-wise manager, Brickell; and his surprisingly patient band members, who repeatedly go out of their way to try to help their high-maintenance lead singer get what he needs to heal.

As for Bart, he definitely has some character shortcomings.  But he’s also determined and idealistic—even amid his deeply hidden hurts—and he’s willing to receive others’ correction, even when it’s an affront to his pride…  (continued…)