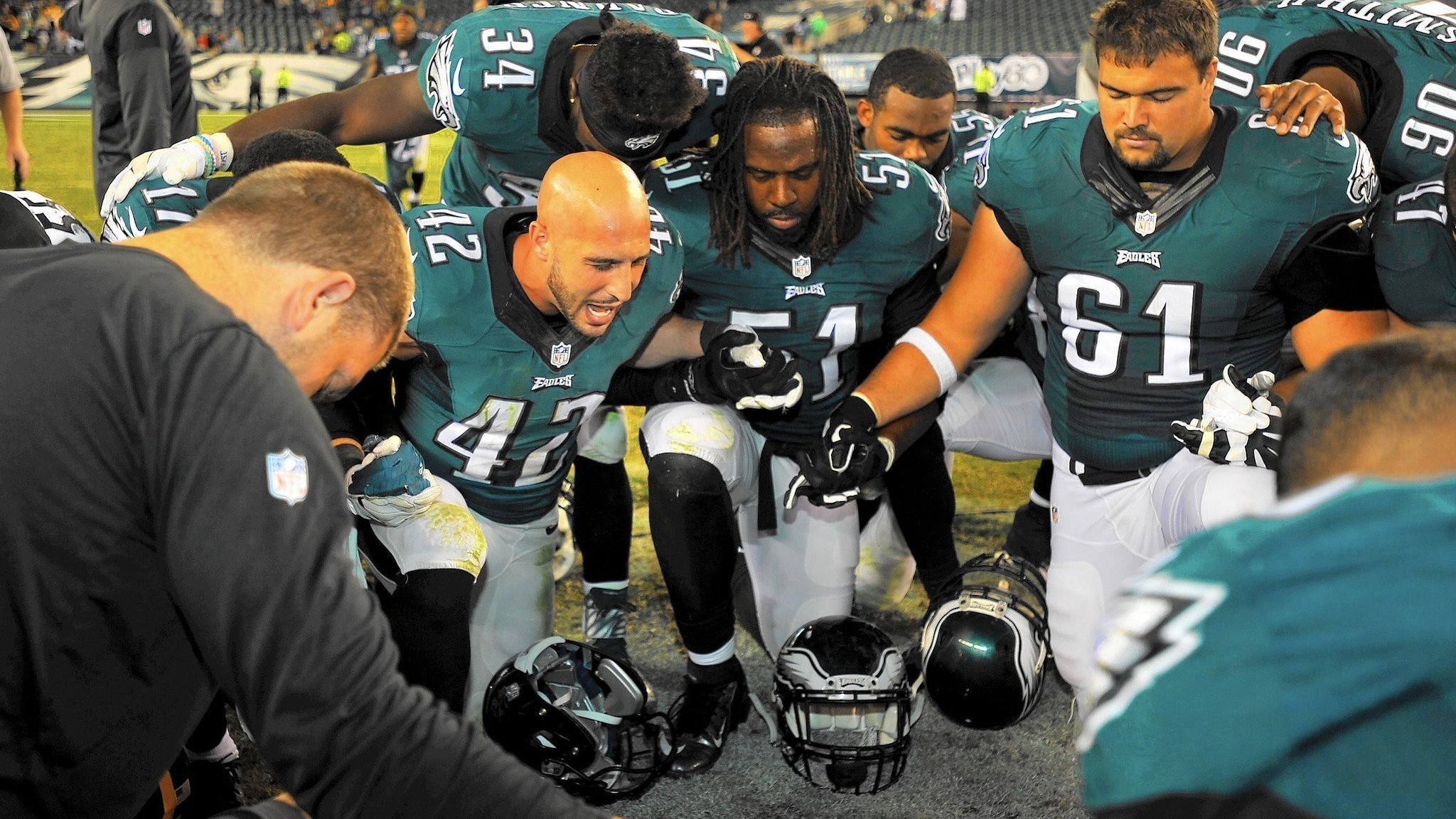 Philadelphia Eagles in prayer after a game.

By John Stonestreet and Roberto Rivera, February 6, 2018, at: http://www.breakpoint.org

There were plenty of intriguing story lines behind Philadelphia’s amazing Super Bowl win.  One of them was the Christian faith of so many of those Eagles.

In the days leading up to Sunday, Amazon Echo owners that asked Alexa who was going to win the Super Bowl received an unusual response: Alexa acknowledged, after much coughing and clearing of “her” virtual throat, that the Patriots were the favorites.  But she quickly added she was rooting for the Eagles for reasons having to do with character and motivation.

And Alexa was right.  The Eagles won, despite Patriot quarterback Tom Brady’s monster game, and it’s almost impossible to deny that the outcome had to do with more than football.  In December, 2016, ESPN ran a story entitled “Members of the Eagles find common ground through spiritual devotion.”  What was described by the article can be rightly called “revival.”

In October 2016, in a gathering whose video has gone viral, five Eagles players were baptized in the pool at their practice facility, while at least fifteen other players “prayed around them.”  If you do the math, that’s at least forty percent of the team roster.

One of the players was linebacker Jordan Hicks, the defensive star of the Super Bowl.  And one of the people doing the baptizing was tight end Trey Burton, whom Sports Illustrated called the game’s “most unlikely hero” for throwing a fourth-down touchdown pass… to the Eagles quarterback Nick Foles.

As ESPN told readers, “With the Eagles, you don’t have to look far to find players who point to faith as playing a primary role in their lives . . . There is Thursday Bible study at the facility, scripture text chains, and late-night prayer sessions at the team hotel the night before each game.”

And it’s not just the players.  Head coach Doug Pederson, when asked how he felt about going from coaching high school football to winning a Super Bowl in just nine years, told NBC, “I can only give the praise to my Lord and Savior Jesus Christ for giving me this opportunity.”

Similarly, offensive coordinator Frank Reich, a former NFL quarterback, served as president of Reformed Theological Seminary in Charlotte, North Carolina between his playing career and returning to the NFL as a coach.  After leading the Buffalo Bills to the greatest comeback in NFL history in 1993, he recited the words to the song “In Christ Alone” at the press conference.

And then, there are the quarterbacks: Carson Wentz and Super Bowl MVP Nick Foles.  Wentz is not shy about sharing his faith with anyone who will listen, including on Twitter.  Foles, who stepped in for Wentz after a season-ending injury, has said that he plans on becoming a pastor after his NFL career is over.

Faith and football in Philadelphia also came together in a video Eagles players made for Football Sunday, an evangelistic outreach group.  In the video, Wentz told pastors that if they are “looking to impact the people in your community, please consider inviting me and other NFL players into your church this Super Bowl weekend.”

The goal was to have churches use the Super Bowl and video testimonies by players like Wentz to reach non-Christian football fans.

The Super Bowl story line only made their testimonies that much more effective.  The Eagles were forced to overcome huge odds, not least of which when Wentz went down in week 14 with an injury that not only ended his MVP caliber season, but seemed to end Philly’s Super Bowl hope as well.

And yet it didn’t.  The Eagles, pardon the cliché, came together as a team.  But what’s certainly not a cliché is what brought them together: their shared faith in Jesus Christ.

To say the least, it’s been a tumultuous season for the NFL.  Ratings are down, fans are disgruntled…  But even the Washington Post noted that the Eagles “strong faith” not only bound them together, but attracted “new fans” in the process.

And that’s something we can all cheer for.

107) Looking for the Great Spirit

936) Martin Luther and the Reformation