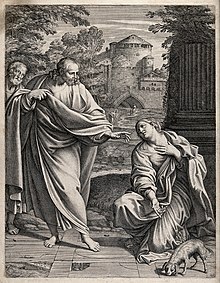 Matthew 15:21-28  —  Leaving that place, Jesus withdrew to the region of Tyre and Sidon.  A Canaanite woman from that vicinity came to him, crying out, “Lord, Son of David, have mercy on me!  My daughter is demon-possessed and suffering terribly.”  Jesus did not answer a word.  So his disciples came to him and urged him, “Send her away, for she keeps crying out after us.”  He answered, “I was sent only to the lost sheep of Israel.”  The woman came and knelt before him.  “Lord, help me!” she said.  He replied, “It is not right to take the children’s bread and toss it to the dogs.”  “Yes it is, Lord,” she said; “Even the dogs eat the crumbs that fall from their master’s table.”  Then Jesus said to her, “Woman, you have great faith!  Your request is granted.”  And her daughter was healed at that moment.

I have four grandchildren and I love them with my whole heart.  They are doing all right so far, but like everyone else in this world, they have had their ups and downs.  And when I hear that any one of them is sad or discouraged or in trouble or hurting in any way, I hurt with them.  When you have children or grandchildren, their pain becomes your pain, and if there is anything you can do to make it better, you will do it.

This story from Matthew 15 is about a desperate mother of a hurting child.  The girl was possessed by a demon, and though we are not told the details of what that all meant, it doesn’t sound good.  The mother told Jesus that her daughter was suffering terribly.  This mother, like any loving parent, will try anything to help her child.  So this anguished woman goes to Jesus and throws herself at the feet of this man who has already healed a multitude of people.  Surely, he will be able and willing to help her daughter.

But what does Jesus do?  He refuses her because she is not a Jew, saying, “It is not right to take the children’s bread and toss it to the dogs.”  What?  Dogs?  That’s a harsh word for a loving mother who just wants a little help for her poor, suffering daughter.

Some have tried to explain this story by making excuses for Jesus; like, maybe he was just tired and crabby.  He was, after all, fully human, and people get tired.  Well, tired, yes, and there are places in the Gospels where it says Jesus was tired.  But even at those times, when someone came to Jesus for help, he didn’t get crabby, but would help them—whether or not they were Jews.

It is more likely that Jesus was testing this woman’s faith.  That idea seems to fit better with how the rest of the story goes.  But Matthew gives no reasons for Jesus harsh response, so we don’t know for sure why he was so mean to this woman at first.  What we do know is that things turned out well for the woman and her daughter in the end; and there is comfort in that.  We have all had the experience of seeming to get the silent treatment from God, and being denied even our most fervent prayers.  But there is great comfort in having the promise that God will, in the end, heal and restore all things.

But let’s just take the text as it is, with all its rough edges and tough words, and let it hit us right between the eyes as it must have hit that woman.  Look again at how Jesus replied to her desperate plea for mercy.  First of all, he ignored her.  Then he said he was sent only to the lost sheep of Israel.  And then Jesus said, “It is not right to take the children’s bread and toss it to the dogs.”

Do you know what that sounds like to me?  As I read this text over and over, it began to remind me of books I have read and movies I have seen about the old South.  It reminds me of those times when a downtrodden black man would try to stand up for his rights to a white man, and the white man would say to him, “You watch your mouth, boy; you just better remember your place.”  The setting of this story in Matthew is far different, but the tone sounds similar.  Could we not paraphrase Jesus’ words in this way: “Remember your place, woman; and your place is not as one of the chosen people, and I am here for them, first of all.  So, get to the back of the line; or perhaps, to the back of the bus.”   Now that doesn’t sound at all like the Jesus we know from the rest of the Gospel stories.  But let’s go with that for a bit before explaining it away too quickly.

Our understanding and application of any Bible story depends greatly on who it is in the story that we identify with.  We like to identify with the good guy, with whoever is on the side of Jesus.  But we need to be honest with ourselves.  For example, in the parable of the Prodigal Son in Luke 15, I’ve always liked identifying with the younger son, the poor boy coming home after making all the wrong moves, being welcomed into the forgiving arms of his loving Father.  But a sermon I once heard on this parable nailed me as the less likable older brother.  I am like the older brother in the parable, faults and all.  I am the responsible one, the one always trying to get it right– but also the one prone to self-righteous impatience with others who are not so longsuffering and obedient and responsible as I believe I am.

Another example is the story of the blind man in John chapter nine.  I might want to identify with the poor, blind beggar who receives the kind, healing touch of Jesus.  But I am probably more like the Pharisees, those of the religious establishment who were theologically sophisticated enough to know that miracles like that don’t happen every day.

Let’s say someone came into my office and said, “Pastor, I think I have been healed.  I sent a  hundred dollars to Benny Hinn, my favorite TV healing minister, and he sent me a prayer handkerchief that he himself blessed, and ever since I received it, I’ve been feeling better.”  I would probably be nice, but I would want to say, “No, that isn’t wonderful.  I think Benny Hinn is a fake, and I hope you are still seeing your doctor; and are you sure you aren’t just by coincidence having a couple good days?”  I am not in any way comparing Jesus to Benny Hinn.  I am just trying to imagine how the religious leaders saw Jesus.  I am a part of today’s religious establishment, and I can understand at least some of their suspicions and hesitations.  So even though on one level I want to identify with the beggar Jesus helps, I actually look far more like the Pharisees, and should pay attention to what Jesus says to them.

So who am I in this story?  Well, I am not a Canaanite and I am not a woman; but I am one of the chosen ones Jesus mentioned—not a Jew, of course, but one who believes in Jesus, and thus is a spiritual descendant of Abraham and one of God’s people.  I believe that.  Therefore, from my position of blessing and privilege, I can take my place at the side of Jesus and say to my similarly privileged congregation, “Jesus did not really mean all that about those lowly folks being dogs.  We aim to be a lot nicer than that to those poor unfortunate people who are beneath us, don’t we Jesus, old buddy, old pal?”  I am an educated, well-off, American, Christian minister; how else should I read that text?  I am used to looking at the rest of the world from a privileged position.  Of course I am going to identify with the chosen ones in the text, so all I have to do is find some way to soften up Jesus words a bit so they don’t offend me or anyone else, and then we can all find ourselves safely on the side of Jesus.

But what if I am identifying with the wrong ones in the story.  What if in this story Jesus is talking to you and me in his ‘harsh’ words?  What if he is saying to us, “Who do you think you are?  Get off your high horse.  My word to this woman is my word to you, and that word is this: ‘Maybe I have someone else in mind for my blessings, someone less filled with pride, and you should take a hint from this woman and humble yourselves before me.’”  (continued…)