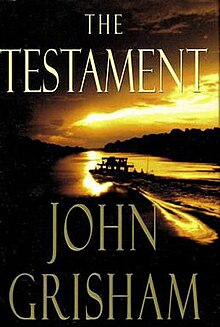 This novel begins with the death of Troy Phelan, the tenth richest man in America.  Phelan despises all six of his contemptible children from three marriages, and leaves none of his eleven billion dollar estate to any of them.  Instead, he leaves everything to Rachel Lane, his illegitimate daughter from an affair four decades earlier.  No one else even knew about Rachel, and Phelan met her only once.  All the members of her small family were dead.  Phelan paid for Rachel’s education, and after seminary and medical school she disappeared into the jungles of Brazil to work as a Christian missionary.  She left instructions with her mission organization to tell no one where she was, and she had no intentions of ever leaving her remote mission.  Nate O’Riley is the wealthy and talented, but deeply troubled lawyer hired for the difficult task of finding her.  When Nate O’Riley finally did find her, she made it clear she had no desire to receive any of the inheritance.  In the piece below, Nate and Rachel discuss their very different lives.

(Rachel said), “I have perfect peace, Nate.  I surrendered my will to Christ many years ago, and I follow wherever He leads.  You think I’m lonely— you’re wrong.  He is with me every step of the way.  He knows my thoughts, my needs, and He takes away my fears and worries.  I am completely and perfectly at peace in this world.”

“You said last night that you are weak and fragile.  What does that mean?”

Confession was good for the soul, Sergio had told him during therapy.  If she wanted to know, then he would try and shock her with the truth.

“I’m an alcoholic,” he said, almost proudly, the way he’d been trained to admit it during rehab.  “I’ve hit the bottom four times in the past ten years, and I came out of detox to make this trip.  I cannot say for sure that I will never drink again.  I’ve kicked cocaine three times, and I think, though I’m not certain, that I will never touch the stuff again.  I filed for bankruptcy four months ago, while in rehab.  I’m currently under indictment for income tax evasion, and stand a fifty-fifty chance of going to jail and losing my license to practice law.  You know about the two divorces.  Both women dislike me, and they’ve poisoned my children.  I’ve done a fine job of wrecking my life.”

There was no noticeable pleasure or relief in laying himself bare.  She took it without flinching.  “Anything else?” she asked.  “Oh yes. I’ve tried to kill myself at least twice— twice that I can recall. Once last August that landed me in rehab. Then just a few days ago in Corumbá.  I think it was Christmas night.”

“Yes, in my hotel room.  I almost drank myself to death with cheap vodka.”

“I’m sick, okay.  I have a disease:  I’ve admitted it many times to many counselors.”

“Have you ever confessed it to God?”

“I’m sure He does.  But He won’t help unless you ask.  He is omnipotent, but you have to go to Him, in prayer, in the spirit of forgiveness.”

“Your sins will be forgiven.  Your slate will be wiped clean.  Your addictions will be taken away.  The Lord will forgive all of your transgressions, and you will become a new believer in Christ.”

“What about the IRS?”

“That won’t go away, but you’ll have the strength to deal with it.  Through prayer you can overcome any adversity.”

Nate had been preached at before.  He had surrendered to Higher Powers so many times he could almost deliver the sermons.  He had been counseled by ministers and therapists and gurus and shrinks of very stripe and variety.  Once, during a three-year stretch of sobriety, he actually worked as a counselor for AA, teaching the twelve-point recovery plan to other alcoholics in the basement of an old church in Alexandria.  Then he crashed.

Why shouldn’t she try to save him?  Wasn’t it her calling in life to convert the lost?

She took his hand and squeezed it firmly.  “Close your eyes, Nate.  Repeat after me:  Dear God, Forgive me of my sins, and help me to forgive those who have sinned against me.”  Nate mumbled the words and squeezed her hand even harder.  It sounded vaguely similar to the Lord’s Prayer.  “Give me strength to overcome temptations, and addictions, and the trials ahead.”  Nate kept mumbling, kept repeating her words, but the little ritual was confusing.  Prayer was easy for Rachel because she did so much of it.  For him, it was a strange rite.

“Amen,” she said.  They opened their eyes but kept their hands together.  They listened to the water as it rushed gently over the rocks.  There was an odd sensation as his burdens seemed to be lifted; his shoulders felt lighter, his head clearer, his soul was less troubled.  But Nate carried so much baggage he wasn’t certain which loads had been taken away and which remained.

He was still frightened by the real world.  It was easy to be brave deep in the Pantanal where the temptations were few, but he knew what awaited him at home.

“Your sins are forgiven, Nate,” she said.

“It’s too easy.  There’s a lot of wreckage back there.”

“It will take more for me than most folks.”

Isaiah 26:3-4  —  You will keep in perfect peace those whose minds are steadfast, because they trust in you.  Trust in the Lord forever, for the Lord, the Lord himself, is the Rock eternal.

Acts 16:29-31a  —  The jailer called for lights, rushed in and fell trembling before Paul and Silas.  He then brought them out and asked, “Sirs, what must I do to be saved?”  They replied, “Believe in the Lord Jesus, and you will be saved.”

Dear God, Forgive me of my sins, and help me to forgive those who have sinned against me.  Give me strength to overcome temptations and the trials ahead.  Amen.