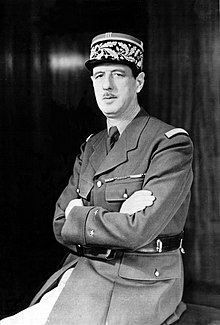 One of the great men of French history had a daughter with a disability.  His faith saw him—and her—through.

From the article France and Down Syndrome, by Eric Metaxas, at http://www.breakpoint.org, May 15, 2017.

Late last year on BreakPoint, I told you about an extraordinary bit of censorship by the French government. See:

What was censored was an ad featuring a smiling, happy child with Down syndrome.  The ad, entitled “Dear Future Mom,” told potential mothers about the joy and love that these children can and will bring into their lives.

So, why was it banned?  Because the French government believes that the ad is “likely to disturb the conscience of women” who had aborted their babies after learning that the child had Down syndrome.

Now I’m going to tell you a story about a Frenchman who saw things very differently:  Charles de Gaulle.

You probably weren’t expecting to hear that.  To most Americans, de Gaulle was, as one writer put it, “an obnoxious, overly ambitious man who, in the grand French manner, strutted even when sitting down.”

He may have been some or all of these things, but there was a side of Charles de Gaulle that few people know about, and that side revolved around his love for his daughter, Anne.

Anne was born on New Year’s Day, 1928, the third of Charles and Yvonne de Gaulle’s three children.  In De Gaulle’s words, Anne was “un enfant pas comme les autres,” a child not like the other children.

As you’ve probably guessed, Anne had Down syndrome.  Only it wasn’t called “Down syndrome” back then.  The children were called “mongoloids,” and, as a recent story by Samuel Gregg of the Acton Institute in the Catholic World Report told readers, “it was common [back then] for French families to place disabled children permanently in hospitals that were woefully ill-equipped to care for them.”

That’s not something that de Gaulle and his family did.  As de Gaulle put it, “God has given her to us.  We must take responsibility for her, wherever she is and whatever she will be.”  And so the family worked hard to make a place for Anne.

While Yvonne worked on the logistics, Charles worked on the affection.  You heard that right:  the affection.  Anne was the apple of his eye.  As the article tells us, “The tall army officer, infamous for his air of haughty disdain as leader of Free France during World War II and later as French President, didn’t hesitate to unbend to play on the floor with Anne.”

He sang to her, read her stories, and taught her how to pray.  Every night, Anne would “painstakingly . . . repeat each word after her father.”  In turn, de Gaulle would proudly tell his relatives that “she knows her prayers!”

As Gregg tells readers, de Gaulle was well aware of how the Nazis treated children like Anne, and this, in turn, inspired his refusal to surrender to the Nazis.  His “act of resistance” was a way of “safeguarding his defenseless daughter from those who viewed her as sub-human.”  As he later said, “Without Anne, I could never perhaps have done what I did.  She gave me the heart and the inspiration.”

The contrast between de Gaulle and his successors in the Elysée Palace is almost too painful to contemplate.  He refused to surrender to the Nazis to protect children with Down syndrome.  After Anne’s death, he and his wife established a foundation, staffed by nuns, to care for people “who are not like the others.”

De Gaulle was a complicated man— most great men are— but one of his complications was his Catholic faith that enabled him to love Anne.  It was a love that, as Gregg put it, helped restore France’s honor; the same honor that was tarnished when, out of fear for hurting people’s feelings, it denied the humanity of the people de Gaulle worked tirelessly to save.

To read Samuel Gregg’s outstanding article, “A Father’s Love: The Story of Charles and Anne,” go to:

Here is the video that was banned in France– it’s wonderful!:

I Peter 2:21  —   To this you were called, because Christ suffered for you, leaving you an example, that you should follow in his steps.

Ephesians 5:1-2  —  Follow God’s example, therefore, as dearly loved children and walk in the way of love, just as Christ loved us and gave himself up for us as a fragrant offering and sacrifice to God.

Galatians 6:2  —  Carry each other’s burdens, and in this way you will fulfill the law of Christ.

O Lord, renew our spirits and draw our hearts to yourself, that our service may not be to us a burden but a delight.  Let us not serve you with the spirit of bondage like slaves, but with freedom and gladness, delighting in you and rejoicing in your work, for Jesus Christ’s sake.  Amen.

8) Turning the Other Cheek