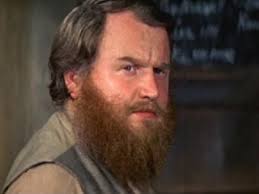 Malachy McCourt in The Molly Maguires, 1970

(…continued)  I will illustrate the message of this parable by telling the story of a man who spent much of his life being the very opposite of a Good Samaritan; and then, how his life improved when he became a Good Samaritan.

The man is Malachy McCourt, now in his 80’s.  Malachy is the younger brother of Frank McCourt, author of the Pulitzer Prize winning childhood memoir Angela’s Ashes, which was made into a movie.  Malachy has also written a book about his interesting life.  Frank and Malachy were two of seven children raised in poverty and misery in Limerick, Ireland.  Three of the children died before the age of five from disease and malnutrition; and the terrible conditions that the family was raised in makes one wonder how any of them survived.  Most of the trouble was caused by their alcoholic father who hardly ever worked, and when he did, he spent it all at the pub on pint after pint of Guinness beer.  Eventually, he abandoned the family, never to return.

Malachy was filled with rage about what his father had done to his mother and the family.  When he grew up, he left for America to get out of Ireland and away from all the bad memories and begin a new life.  Here in America, in no time at all, he became a world-class drunk, got married, was unfaithful from the very beginning, and had two children, which he then abandoned.  He remained extremely angry with his father for what he had done to the family, while at the same time, he was making all the same mistakes and doing the very same thing to his own family.

McCourt is a brilliant man, and eloquently describes his three decades of alcoholism.  He was never at a loss for words, and, was a natural at acting, so he had various jobs as an actor in plays and television and movies, along with being a radio talk show host and businessman.  But his drinking always ruined everything; and while at times he had a huge income, at many other times he was as poor as his father had been back in Ireland.  He was completely irresponsible, not only in his marriages and with his children, but also in his business dealings, his friendships, and all his other relationships.  He lied, cheated, provoked, fought, spent time in jail, worked for a time with an international smuggling ring, got fired from most of the jobs he held, and kicked out of many of the places he went.  He is a great story-teller, his accounts can be hilarious, and he really did have some incredible experiences.  At times, the reader might even begin to envy him for some of his many adventures and his sometimes exciting life; except that he makes very clear that none of that brought him any happiness or peace of mind.

Reading the story of the Good Samaritan brought to my mind the huge difference between the life of Malachy McCourt and the actions of that Good Samaritan.  It occurred to me how unselfish was that Good Samaritan’s act of kindness.  He had nothing to gain and much to lose by stopping to help that man on the side of the road, and yet he did so.  But Malachy McCourt’s life, for so many years, was lived completely for himself.  He could not understand why his wife was so upset with him for never being home, and never bringing home a paycheck.  After all, he told her that he loved her– what more did she want?  After the divorce, the court order was that he should not take the children into a bar when he had them for the weekend.  But having no place else to go, he took them to the bar, and when they told their mother, and she got mad, and then he got mad at the children.  When business partners got upset with his arrogance and irresponsibly, he got mad at them.  And, he ridiculed those who tried to help others, because in his life, everything was done for himself alone.  That was his way to live and be happy– to live only for himself.  In fact, he owned a bar in New York for a time, and the name of the place was ‘Himself.’

In escaping the misery of his childhood, he had roared into adulthood, desperately seeking all the friends and good times he could.  But even though his whole life was centered on making himself alone happy, he ended up lonely and poor and an alcoholic and oftentimes suicidal.  He ended up worse than he was as a child in Limerick, where at least he was able to keep alive the hope for a better future.  By middle-age, all he had left was the alcohol induced happiness when he was drunk.  But, when he was sober, there was an ever deepening despair.

What saved Malachy McCourt from himself was the opportunity to help someone else– the chance to be a Good Samaritan.  (continued…)

Ecclesiastes 2:1…10-11  —  I said to myself, “Come now, I will test you with pleasure to find out what is good.”  But that also proved to be meaningless…  I denied myself nothing my eyes desired; I refused my heart no pleasure.  My heart took delight in all my labor...  Yet when I surveyed all that my hands had done and what I had toiled to achieve, everything was meaningless, a chasing after the wind; nothing was gained under the sun.

Thou hast formed us for Thyself, O Lord, and our hearts are restless until they find their rest in Thee.