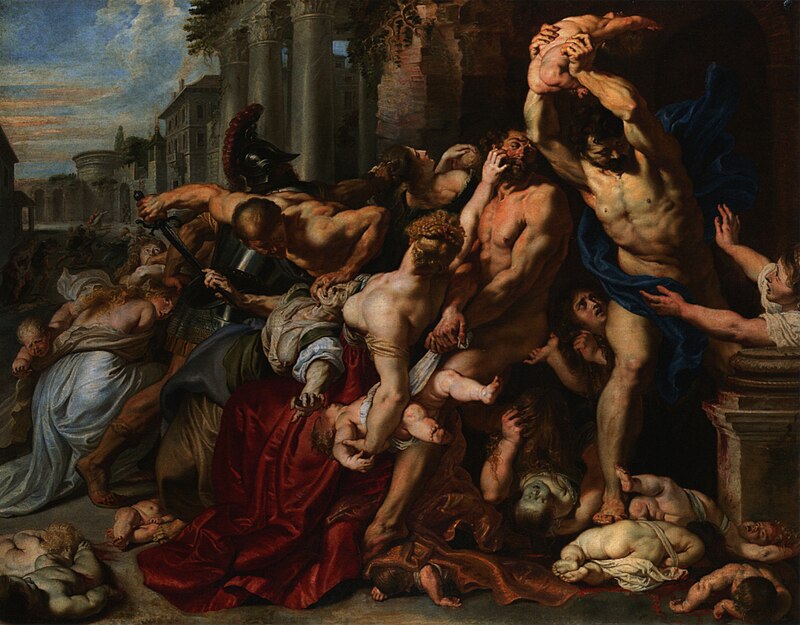 Their story is told in Matthew 2:13-18.  King Herod feared that his reign was going to be threatened by the birth of a new king, foretold many centuries before by the ancient prophets.  A visit by three astrologers, or Magi, from the East reinforced his fears.  They had told them that they also had read all the signs in the stars and determined that a new king had indeed recently been born in Bethlehem, just outside Jerusalem.  They said they were on their way to see him.  When the Magi did not return to tell King Herod where they had found the new king, he had ALL the little boys under two years old in Bethlehem taken from their mothers and slaughtered by his soldiers.  Herod did not know which one was born to be king so he had them all killed, thinking he could over-rule the prophecy and eliminate the threat.

Herod was the first of many rulers throughout history who would not welcome the rule of this new king, and the little boys who died that day were only the first of millions who would die because of the opposition of wicked rulers to this Savoir and King of the world.  From the earliest times, the church would call them martyrs.

The dictionary has three definitions for martyr.  First of all, a martyr is someone who chooses to die rather than give up their religious beliefs.  Second, a martyr is someone who endures great sacrifices for a cause; and third, a martyr is one who suffers greatly.  The first definition includes the other two, and that has been the fate of millions of Christians over the past twenty centuries.  When we think about Christian martyrs, we usually think of the earliest Christians who suffered at the hands of the Romans.  Thousands died in the arenas, killed by lions and other wild beasts for the entertainment of the Romans in the sporadic persecutions in those early centuries of the Christian Church.

But no century has had more martyrs than the 20th century, with more Christians dying for their faith in that century than in all the nineteen previous centuries of church history.  And the 21st century is starting out even worse.  Christians are targeted for persecution in many countries of the world.  I’ll remind you of just two examples of what we have been hearing about all year.  On February 15 the ISIS released a video showing the beheading of 21 Coptic Christians, accused of being “people of the cross, followers of the hostile Egyptian Church.”  And on April 5 gunmen targeted Christian students at the Garrisa University in Kenya, killing 148 and injuring 79 more.

Christians are often told to deny Christ or die and many choose death.  I do believe God would forgive threatened captives for telling a lie to save their lives and return to their families.  But then their persecutors would be able to tell all the world about the weak the faith of the Christians.  But those who choose to die show the whole world how faith in Christ allows them to die with courage and hope.  Those who hear about this have often desired that same that kind of faith, and look for someone to tell them about Jesus.  From one perspective, what these martyrs do might look insane.  But from the perspective of eternity, their courageous deaths will be seen as wise and obedient and courageous.  It has been because of acts like that that the church has grown and spread around the world.  The word martyr itself comes from another word which means ‘witness’– a martyr ‘bears witness’ to his or her faith.  Many years ago someone said, “The blood of the martyrs is the seed of the church.”

I am of German heritage.  Jesus was not born in Germany, so the Gospel had to be taken there by missionaries.  St. Boniface was the man God used to establish the church in Germany, and he faced much violent opposition.  The opposition lasted throughout his life, and in the end, he too became a martyr.  He was killed right after a worship service in which he confirmed several new converts.

The blood of the martyrs is the seed of the church.

One of the twenty-one men who were beheaded by ISIS was not a Christian– that is, he wasn’t a Christian until he saw the faith of the men who refused to deny Jesus and died for it.  He was from Chad (the darker skinned man in the photos below).  The terrorists told all the men to reject their faith in Christ or die.  When the man from Chad was asked about his faith, he looked at his Christian friends and said, “Their God is my God,” and so he also was beheaded.

Matthew 2:16  —  When Herod realized that he had been outwitted by the Magi, he was furious, and he gave orders to kill all the boys in Bethlehem and its vicinity who were two years old and under, in accordance with the time he had learned from the Magi.

Luke 12:4-5  —  (Jesus said),  “I tell you, my friends, do not be afraid of those who kill the body and after that can do no more.  But I will show you whom you should fear:  Fear him who, after your body has been killed, has authority to throw you into hell.  Yes, I tell you, fear him.”

Matthew 5:10  —  (Jesus said), “Blessed are those who are persecuted because of righteousness, for theirs is the kingdom of heaven.”

I Peter 4:16  —  If you suffer as a Christian, do not be ashamed, but praise God that you bear that name.

Romans 1:16a  —  For I am not ashamed of the gospel, because it is the power of God that brings salvation to everyone who believes.

We remember today, O God, the slaughter of the holy innocents in Bethlehem by the order of King Herod.  Receive, we pray, into the arms of your mercy all innocent victims, and by your great might frustrate the designs of evil tyrants and establish your rule of justice, love, and peace; through Jesus Christ our Lord, who lives and reigns with you and the Holy Spirit, one God, now and forever.  Amen.