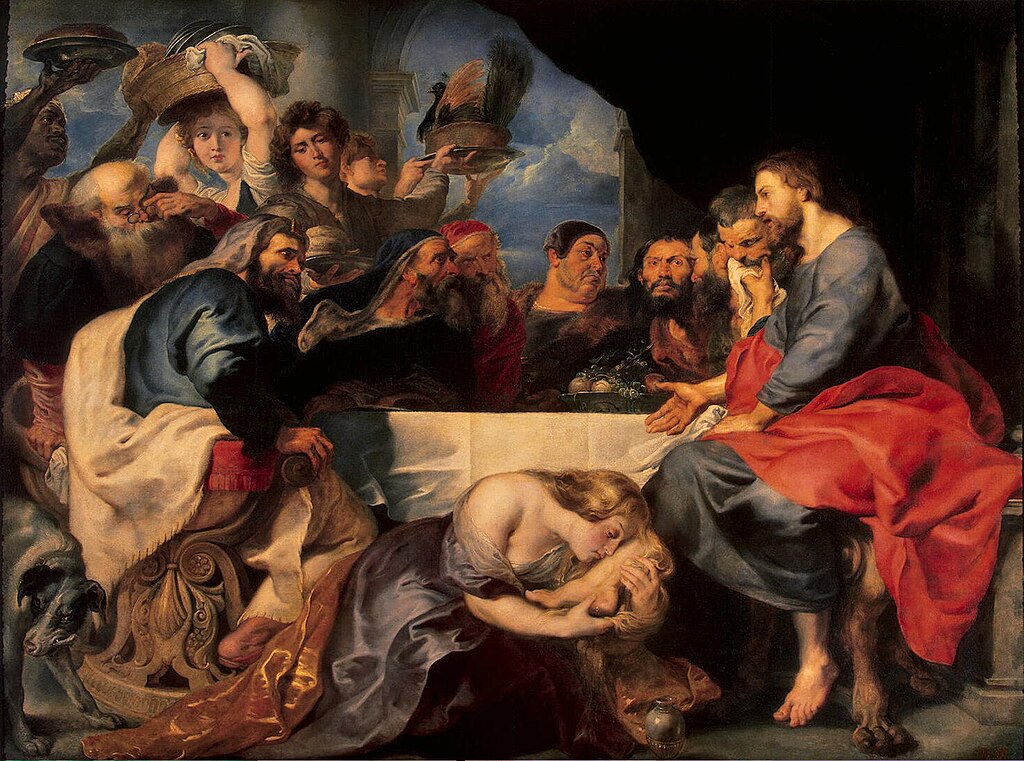 Feast in the House of Simon the Pharisee, Peter Paul Rubens, 1619

When one of the Pharisees invited Jesus to have dinner with him, he went to the Pharisee’s house and reclined at the table.  A woman in that town who lived a sinful life learned that Jesus was eating at the Pharisee’s house, so she came there with an alabaster jar of perfume.  As she stood behind him at his feet weeping, she began to wet his feet with her tears.  Then she wiped them with her hair, kissed them and poured perfume on them.  When the Pharisee who had invited him saw this, he said to himself, “If this man were a prophet, he would know who is touching him and what kind of woman she is—that she is a sinner.”

Jesus answered him, “Simon, I have something to tell you.”

“Two people owed money to a certain moneylender.  One owed him five hundred denarii, and the other fifty.  Neither of them had the money to pay him back, so he forgave the debts of both.  Now which of them will love him more?”

Simon replied, “I suppose the one who had the bigger debt forgiven.”

“You have judged correctly,” Jesus said.

Then he turned toward the woman and said to Simon, “Do you see this woman?  I came into your house.  You did not give me any water for my feet, but she wet my feet with her tears and wiped them with her hair.  You did not give me a kiss, but this woman, from the time I entered, has not stopped kissing my feet.  You did not put oil on my head, but she has poured perfume on my feet.  Therefore, I tell you, her many sins have been forgiven—as her great love has shown.  But whoever has been forgiven little loves little.”

Then Jesus said to her, “Your sins are forgiven.”

The other guests began to say among themselves, “Who is this who even forgives sins?”

Jesus said to the woman, “Your faith has saved you; go in peace.”

The Pharisees were good people, but they were proud and self-righteous, quick to look down on those who were not as well behaved.  Despite their many disagreements, the Pharisees were intrigued by Jesus and often sought his company.  And Jesus often criticized the Pharisees for their sin of pride and lack of love for others.

Luke 7:36-50 tells the story of when Jesus was invited to the home of a Pharisee named Simon.  While Jesus and Simon were having dinner, a woman who had not been invited somehow got into the house and began washing the feet of Jesus and anointing them with perfume.  This sounds odd to us, but in those days such foot washing was a way to show respect for someone.  Simon did not object to the anointing, but he was outraged by who was doing it.  This woman had lived a sinful life in that town, and she should not have been in Simon’s house and touching this holy man.  Simon thought to himself that if this Jesus really was a prophet, he would know what kind of woman this was and would not allow her presence.  Simon thought Jesus should be able to SEE who this woman really was.

But Jesus turned the table on Simon, putting the very same question to him, asking, “Simon, do you really SEE this woman?”  Each man is questioning how the other perceives this woman.  So what does each man see?

Simon saw the woman on only one level.  The story took place in a small town where everyone knew everyone, and this woman had a bad reputation.  She had made her share of mistakes, and everyone knew she lived a sinful life.  That was all that Simon saw, and Simon believed sinners like her should be avoided.

Simon did not think Jesus knew what kind of woman this was, but Jesus’ later words about the forgiveness of her many sins showed that he indeed knew all about her.  Jesus always knew all about everyone he met.  But unlike Simon, Jesus did not see her on only that level.  She was a sinner, yes, but she was also a child of her heavenly Father.  She was sorry for her many sins, she regretted her past, and wanted to be forgiven.  And that, Jesus implied, made her a better person than Simon.  Jesus said to Simon, “I came into your house and you did not even give me water to wash my feet– but this woman has wet my feet with her tears and wiped them with her hair.  She who has been forgiven much, loves more than one who needs to be forgiven only a little.”

Jesus was able to see this woman on every level– as the sinner she was, and also as a loved child of God.  He did not ignore her sin, and even called attention to it.  But then he also proclaimed God’s forgiveness of her sins.

There are two lessons here for us.  First of all, we are not Jesus, so we cannot see other people with all the depth of insight that he can.  But we can at least acknowledge that there is more to people than what we see.  Yes, there is certainly even more wrong with them than what we are eager to see and point out.  But at the same time, no matter who they are, they were made in the image of God, and are loved by God, and thus, they are not to be despised by us.  There may well be some goodness in them, even some God-given gifts in them, or some divine purpose for them that we do not see.  Everyone knows the frustration of being misunderstood by others.  Having felt that ourselves, we should be more than willing to grant that at least some of what we do not like about others may be a result of our misunderstanding of them.  Someone’s actions may make it necessary to avoid them.  But what is in their heart can be seen only by God, and it is best to leave the final judgment up to Him.

Secondly, it should be a comfort to know that Jesus sees us as he saw that woman.  He knows all about us, even to the depths of our heart and soul, but he is still willing to forgive and accept us.  God knows you better than you know yourself.  He understands what others may misunderstand about you.  He knows what you are proud of, and he knows all about what you are most ashamed of.  Yet, when we come to him for his forgiveness, as this woman did, he receives us as he received her.  No matter what you have done, no matter how many mistakes you have made, no matter how you have failed, Jesus will not write you off, but stands ready to receive you and forgive you if you look to him.  We are still expected to do what is right, and there will be consequences if we do not; but it is not that obedience that makes us right with God.  Rather, it is God’s freely given forgiveness through Christ Jesus, and our faith in Him.

God sees all, and judges all, and forgives all for all who will receive Him.  It is for us to acknowledge our sin and repent, and then to pray for, believe in, and receive that forgiveness of God in Christ Jesus, our Lord and Savior.

419) ‘Consolation on the Death of Friends’ by Johann Gerhard