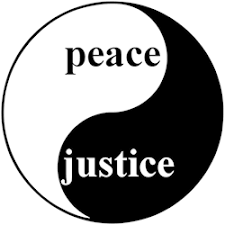 (…continued)  I have been going to church conventions for over 30 years, and have heard many debates on resolutions in which well-meaning Lutherans have supported various causes in the name of peace and justice.  Some have wanted to support unjust regimes because at least they kept the peace, and some have wanted to support violent revolutions to bring about justice.  South Africa, Iran, Iraq, Kuwait, Nicaragua, Panama, Rwanda, Somalia, Syria, Lybia, Bosnia, Sudan, Cuba, and more; in every one of those situations, it was of little help to just be in favor of peace and justice.  It often has to be one or the other for a while, and hard choices must be made.  Those not responsible for the choice can make signs or write newspaper columns, and criticize.  If the peace is being maintained, they can complain about the absence of justice.  If force is used to attain justice they can complain about no peace.

Sometimes, those on the conservative end of the spectrum will try to keep the peace, even when that means allowing great injustices.  Sometimes, those on the liberal end of the spectrum will advocate violence in the pursuit of a more just society.  And sometimes, it is the other way around.  It is a messy world, and good, faithful, Bible-believing Christians can honestly disagree on what messy methods should be used to achieve greater peace and justice.  And mistakes are often made by well-meaning people.

As a nation, it is sometimes necessary and helpful to enter into these conflicts, and sometimes it is not.  As individual citizens, Christians have a duty to be informed voters, and may even, as politicians, enter the debate and promote one course of action or another.  But it is usually best for the church to stay out of these things most of the time; perhaps not every time, but certainly most of the time.

The church has something more important to be concerned about, and Jesus himself points this out in his words to Pilate in John 18.  “Are you the king of the Jews?” Pilate had asked, and Jesus said did not say that he wasn’t.  But he he did say, “My kingdom is not of this world; my kingdom is from another place.”  Jesus did not align himself with the establishment which was trying to keep the peace, nor did he align himself with the revolutionary zealots who by violence wanted to create a more just society.  He had more important matters, eternal matters, on his mind.  In getting too closely aligned with the kingdoms of this world, the church stands to lose focus, credibility, and clear purpose.

Then Jesus told Pilate exactly what he is here for, and therefore, what the church should also be about.  Jesus said, “I am here to testify to the truth, and everyone who listens to me is on the side of the truth.”  What Jesus meant by truth was much bigger than political truth, much bigger than peace and justice issues.  He had already said that his kingdom was not of this world, and throughout his ministry he was always pointing to his heavenly Father, to that eternal kingdom, and to himself as the one who can offer the forgiveness of sins and eternal life.  Jesus was always calling on us to believe in him, and to believe that what he said was true.  “I am here,” he said, “to testify to the truth.”

This is what we must remember about Jesus.  Believing in Jesus is, most of all, a matter of truth.  Faith is not a matter of what works, what is good for society, or what most effectively brings peace and justice.  The test of faith is not if it guarantees happiness, fulfillment, peace, prosperity, or whatever else, no matter how desirable.  Those are all agendas of our own that we place on Jesus.  And while some of those things might come along as a part of what it means to believe Jesus, believing in Jesus is primarily a matter of truth.

Jesus was always concerned about truth, but he was not always concerned about peace.  One time, in fact, he made it clear that he came not to bring peace, but division (Luke 12:51).  And the message of Jesus was not so much about justice as it was about grace.  Remember the parable of the wage-earners?  Those that started at the end of the day got paid the same as those who started first thing in the morning.  That wasn’t ‘justice.’  That was grace.  Some received even more than what was just (Matthew 20:1-16).  It is by grace that we are saved, not by getting what we justly deserve.  And we can all be grateful for that.

Questions of whether or not Christianity works will get one into all kinds of side issues, from the problem of suffering, to the errors and shortcomings and divisions of the church, to the negative witness of so many Christians, to the divisive debates at church conventions about what political course to follow, to debates on science and Christianity and what should be taught in schools, and on and on.  All of these things raise important questions and need to be discussed.

But as we do so, we must always stayed focused on the main point, and that is the truth of who Jesus was and still is.   The truth of Christianity all depends on Jesus, and we must remember that Christianity, if false, is of no importance, and if it is true, it is of infinite, eternal importance.  That is regardless of whether it seems to be working or not working in any given situation or individual.

“My Kingdom,“ Jesus told Pilate, “is not of this world.”

John 18:36  —   Jesus said, “My kingdom is not of this world.  If it were, my servants would fight to prevent my arrest by the Jewish leaders.  But now my kingdom is from another place.”

John 18:37b  —  (Jesus said), “The reason I was born and came into the world is to testify to the truth.  Everyone on the side of truth listens to me.”

Lord Jesus, give us the grace to follow you, the Way, to learn from you, the Truth, and to live in you, the Life.

1837) Praying for Your Enemies