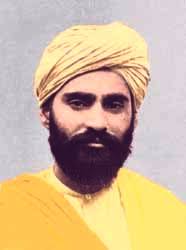 Sundar Singh (1889-1929) was raised a member of the Sikh religion.  Prior to his conversion, he attended a primary school run by the American Presbyterian Mission where the New Testament was read daily as a ‘textbook.’  He said, “I refused to read the Bible at the daily lessons…  To some extent the teaching of the Gospel on the love of God attracted me, but I still thought it was false.”  The name of Christ filled Sundar’s mind with angry resentment, and so strong were his feelings during this time that on one occasion, when the shadow of a Christian missionary fell across him, he spent a whole hour in washing away the pollution.

In the midst of such confusion and while only fourteen years old, his mother died, and Sundar underwent a crisis of faith.  His mother was a loving saintly woman and they were very close.  In his anger, Sundar burned a copy of one of the Gospels in public.  Within three days he could bear his misery no longer.  Late one night in December 1903, he rose from bed and prayed that God reveal himself to him if he really existed.  Otherwise, he said, “I planned to throw myself in front of the train which passed by our house.”  For seven hours Sundar prayed, “O God, if there is a God, reveal thyself to me tonight.”  The next train was due at five o’clock in the morning.  The hours passed.  Suddenly the room filled with a glow.  A man appeared before him.  Sundar heard a voice say, “How long will you deny me?  I died for you; I have given my life for you.”  He saw that the man’s hands had been pierced by nails.  Amazed that his vision had taken the unexpected form of Jesus, Sundar was convinced in his heart that Jesus was the true Savior, and that He was alive.  Sundar fell on his knees before Him and experienced an astonishing peacefulness which he had never felt before.  The vision disappeared, but peace and joy lingered within him.
Despite his family’s pleas, bribes, and threats, Sundar wanted to be baptized in the Christian faith.  After his father spoke words of official rejection over him, Sundar became an outcast from his people.  Against great opposition, he was baptized on his birthday in 1905 in an English church in Simla.
Conventional Indian churches were willing to grant him a pulpit, but their rules were foreign to his spirit.  Indeed, he felt that a key reason the gospel was not accepted in India was because it came in a garb foreign to Indians.  He decided to become a ‘sadhu,’ a wandering holy man, so that he could dedicate himself to the Lord Jesus.  He was convinced that this was the best way to introduce the Gospel to his people since it was the way which his people were accustomed to.  As a sadhu, he wore a yellow robe, lived on the charity of others, abandoned all possession and maintained celibacy.  In this lifestyle he was free to devote himself to the Lord.  Dressed in his thin yellow robe, Sundar took to the road to began a life of spreading the simple message of love and peace and rebirth through Jesus.  He carried no money and no possessions other than a copy of the New Testament.
Sundar journeyed much.  He traveled all over India and Ceylon, and then visited Malaysia, Japan and China.  Between 1920-1922 he went to Western Europe, Australia and Israel, preaching in many cities.  Despite his growing fame, Sundar retained a modest nature, desiring only to follow Jesus’ example, repay evil with kindness, and win over his enemies by love.  He was quite independent of outward Church authority in all his religious life, thought, and work.  He attended a Christian seminary for only a brief time before dropping out.
Sundar visited Tibet every summer.  While traveling in Tibet in the summer of 1929, he disappeared among the foothills of the Himalayas, and was presumed dead.
*********************************
Deuteronomy 4:29-30 —  If … you seek the Lord your God, you will find him, if you look for him with all your heart and with all your soul.   When you are in distress and all these things have happened to you, then in later days you will return to the Lord your God and obey him.
Luke 11:9-10  —  (Jesus said), “So I say to you:  Ask and it will be given to you; seek and you will find; knock and the door will be opened to you.   For everyone who asks receives; he who seeks finds; and to him who knocks, the door will be opened.”
Acts 17:26-27a  —  From one man he made every nation of men, that they should inhabit the whole earth; and he determined the times set for them and the exact places where they should live.   God did this so that men would seek him and perhaps reach out for him and find him, though he is not far from each one of us.   ‘For in him we live and move and have our being…’
**********************************

A PRAYER BY SADHU SUNDAR SINGH:  My Lord God, my all in all, look in mercy upon me and so fill me with Thy Holy Spirit that my heart shall have no room for love of anything but Thee.  I seek from Thee no other gift but Thyself, who art the Giver of life and all its blessings.  From Thee I ask not for the world or its treasures, but Thee alone do I desire and long for, and where Thou art there is Heaven.  The hunger and the thirst of this heart of mine can be satisfied only with Thee who hast given it birth.  Thou hast created my heart for Thyself alone, and not for another, therefore this my heart can find no rest or ease save in Thee, in Thee who hast both created it and set in it this very longing for rest.  Take away then from my heart all that is opposed to Thee, and enter and abide and rule for ever.  Amen.