…We can make as many improvements as we want to our duck blinds, but they’ll never be as good as the ancestral holes.  Some of the land next to mine used to be a swamp, but the owners leveled it in the 1960s and turned it into rice fields.  Some guys got in a duck blind over there and noticed that ducks kept flying to one particular spot on the field.  They asked the farmer why ducks were sitting there, and he told them it’s where a lake used to be.  The trees and the water are gone, but the ducks are still flying there because it was where the lake once was.  It’s in their genetic makeup to fly there.

It’s one of the phenomena of Mother Nature that can’t be explained through science.  There are a lot of them, and the only explanation I can come up with is that God is in charge and has a blueprint for how everything works.  Take, for instance, the Arctic tern, a medium-sized bird, which is famous for flying from its Arctic breeding grounds to Antarctica and back every year, covering more than 43,000 miles round-trip.  The terns travel down the coast of Brazil or Africa to get to their wintering ground every year.  Some evolutionists want us to believe that the reason they fly to Antarctica every year is because once upon a time one tern found its way there, told some terns about it, and then they all started going there.  Makes a lot of sense, doesn’t it? 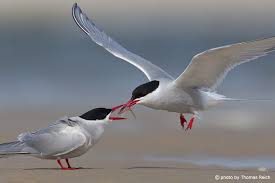 I, for one, believe the terns were born knowing they had to fly to Antarctica every winter to survive.  To prove the point, researchers once robbed a tern’s nest and raised the little birds away from their mother.  Then they banded them when they were old enough to fly.  The terns had never seen Antarctica and had never been around another tern to tell them to fly there.  So when it was time for the terns to fly south, the researchers flew over the Arctic Ocean and dropped them from an airplane.  The terns made one circle and then flew south, arriving in Antarctica a few weeks later.

The ducks that fly south from Canada each year and winter throughout Florida, Louisiana, Texas, parts of Central America, and beyond are the same way.  Everything from alligators to snapping turtles to skunks rob ducks’ nests and eat their eggs.  Foxes, coyotes, and birds of prey eat their babies when they’re young.  Humans hunt ducks, too, and they put meat on our tables.  It’s the Almighty sending literally millions and millions of pounds of protein from one end of a continent to the other end, feeding all of these things along the way.

It’s like the mayfly on the river.  A mayfly starts out as a larva in the water and looks like nothing more than a little maggot.  When the water level rises, the larvae crawl up the trees on the riverbank.  They build cocoons that look like spider webs and then emerge as flying creatures.  You see mayflies flying all over the river and they live only long enough to drop their eggs into the water.  Why?  Because when they die and fall into the water, fish come up and eat them.  Mayflies are fish food!  It’s a cycle:  mayflies drop their eggs and then they die, fish eat them, the larvae climb up the trees, and then it starts all over again.  Who’s feeding the fish?  The Almighty is feeding the fish.  God is feeding everything, including you and me…

Psalm 145:15-17  —  The eyes of all look to you, and you give them their food at the proper time.  You open your hand and satisfy the desires of every living thing.  The Lord is righteous in all his ways and faithful in all he does.

Psalm 104:27-30  —  All creatures look to you to give them their food at the proper time.  When you give it to them, they gather it up; when you open your hand, they are satisfied with good things.  When you hide your face, they are terrified; when you take away their breath, they die and return to the dust.  When you send your Spirit, they are created, and you renew the face of the ground.

Give us Lord, a bit o’ sun,
A bit o’ work and a bit o’ fun;
Give us all in the struggle and sputter
Our daily bread and a bit o’ butter.

–On the wall of an old inn, Lancaster, England