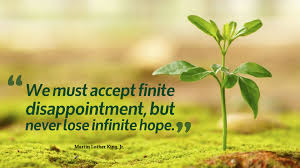 During his five years as a prisoner in North Vietnam, Major F. J. Harold Kushner encountered a twenty-four-year-old Marine who had made a deal with his captors.  The soldier agreed to cooperate with the Viet Cong, and in return the commander of the prison camp promised that he would let him go, as he had done for a few others in the past.

And so the tough young Marine became a model prisoner, even leading the camp’s thought-reform group.  His health remained relatively good for two years.  But over time it gradually became clear that the commander had lied.  He actually had no intention of releasing him.  According to writer Doug Colligan’s account of the incident, “The soldier became a zombie.  He refused to do all work, rejected all offers of food and encouragement, and simply lay on his cot, sucking his thumb.  In a matter of weeks, he was dead.”

If his cause of death could be summarized in one word, it would probably be: hopelessness.

You see, hopelessness can kill.  In World War II, Korea, and Vietnam, doctors said many prisoners died from a condition they termed “give-up-itis.”  Facing grim conditions with no apparent prospect of freedom, some of the prisoners became demoralized and stuck in despair.  With their hope drained, they slowly wasted away.

There’s no question about it: The human spirit needs hope to survive and thrive.  “Since my early years as a physician,” wrote Dr. Arnold Hutschnecker, “I learned that taking away hope is, to most people, like pronouncing a death sentence.  Their already hard-pressed will to live can be paralyzed, and they may give up and die.”

Think of the horror of hopelessness.  As I was reading a newspaper recently, I came across an article about a judge who sentenced a nineteen-year-old murderer to life in prison, with no possibility of parole.

Can you imagine that?  No hope for freedom.  It reminded me of the inscription over the entrance to hell in Dante’s Divine Comedy: “All hope abandon, ye who enter here!”

As I grappled with the question of what Jesus might say to famous and infamous-individuals in the news today, my mind kept coming back to the issue of what He would say to everyday people like you and me.  What would He talk about if He came face-to-face with you?  What words would He choose as you stood there staring Him in the eyes?

Somehow I think He would touch on the topic of hope.  After all, the writers of the Bible recognized centuries ago that hope is central to the human spirit.  “Hope deferred makes the heart sick,” King Solomon wrote in Proverbs 13:12, “but a longing fulfilled is a tree of life.”

In fact, the Bible could be called a book of hope.  All told, there are eighty-six references to hope in the Old Testament, with another eighty in the New Testament.  Hope is a theme that’s woven throughout Scripture.

And in these days when your future may be uncertain where your health may be precarious, where a sense of guilt may weigh you down, where the soaring crime rate punctuates life with a question mark and the environment is deteriorating, where people are increasingly alienated from each other, and where spirituality has become superficial; I think Jesus would tenderly put His arm around your shoulder and say: “I can understand your fears and frustrations, your anxieties and longings, but it’s very important that you understand this about Me—I am the God of hope.”

Isn’t that what the world wants?  “People in many nations appear to be searching with a new intensity for spiritual moorings,” wrote George Gallup, who has his finger on the public’s pulse.  “One of the key factors prompting this search is certainly a need for hope in these troubled times.”

I believe Jesus would tell you, “I am that hope, because I’m the God of the second chance.”  He is uniquely capable of replenishing the hope that the world can sap from us.  As the apostle Paul prayed in Romans 15:13: “May the God of hope fill you with all joy and peace as you trust in him, so that you may overflow with hope by the power of the Holy Spirit.”

I Thessalonians 5:13-14  —  Brothers and sisters, we do not want you to be uninformed about those who sleep in death, so that you do not grieve like the rest of mankind, who have no hope.  For we believe that Jesus died and rose again, and so we believe that God will bring with Jesus those who have fallen asleep in him.

II Corinthians 1:9-10a  —  We felt we had received the sentence of death.  But this happened that we might not rely on ourselves but on God, who raises the dead.  He has delivered us from such a deadly peril, and he will deliver us again.  On him we have set our hope.

Romans 8:24-25  —  In this hope we were saved.  But hope that is seen is no hope at all.  Who hopes for what they already have?  But if we hope for what we do not yet have, we wait for it patiently.

In you, Lord my God, I put my trust…  Show me your ways, Lord, teach me your paths.  Guide me in your truth and teach me, for you are God my Savior, and my hope is in you all day long…  Turn to me and be gracious to me, for I am lonely and afflicted.  Relieve the troubles of my heart and free me from my anguish.  Look on my affliction and my distress and take away all my sins.

2089) The Greatest Hymn of Thanksgiving Ever Written