Alice Kahana, an artist who lived in Houston, had a painful and vivid life-long memory of her journey to Auschwitz as a fifteen-year-old girl.  On the way, she became separated from her parents and found herself in charge of her eight-year-old brother.   When the boxcar arrived, she looked down and saw that the boy was missing a shoe.  “Why are you so stupid !” she shouted at him, the way older sisters are inclined to do.  “Can’t you keep track of your things?”

This is nothing out of the ordinary, except that those were the last words that passed between them.  Right after she said that, they were herded into different cars and she never saw him again.

Half a century later, Alice Kahana was still living by a lesson that was learned on that terrible day.  She vowed to never again say anything that could not stand as the last thing she ever said to someone.

–Adapted from The Art of Possibility, by Rosamund Stone Zander and Benjamin Zander, (Penguin Books, 2000) page 174.

We’d save ourselves a lot of pain and heartache if we would follow one simple rule:  Slow down when we’re angry or hurt.

The Bible says, “Everyone should be quick to listen, slow to speak and slow to become angry” (James 1:19b NIV).

Yet, usually we do just the opposite.  We’re quick to speak, slow to listen, and swift to become angry.  That’s backward!  But if you do the first two — be slow to speak and quick to listen — the last part will be automatic.  You’ll find yourself becoming angry less often and less naturally.

There’s an important rhythm to this idea, which the Bible reiterates over and over again (see verses below for a few examples).

How do you slow down and think before rushing to anger?  Consider these five questions before speaking in when angry:

It’s not enough just to slow down when we’re angry.  Take extra time to T-H-I-N-K about what to say or do next. 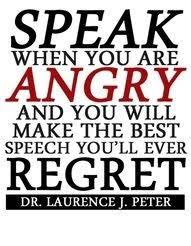 Proverbs 14:29  —  Whoever is patient has great understanding, but one who is quick-tempered displays folly.

Proberbs 15:28  —  The heart of the righteous weighs its answers, but the mouth of the wicked gushes evil.

Proverbs 15:18  —  A hot-tempered person stirs up conflict, but the one who is patient calms a quarrel.

Proverbs 15:1  —  A gentle answer turns away wrath, but a harsh word stirs up anger.

O divine Master, grant that I may not so much seek
to be consoled as to console,
to be understood as to understand,
to be loved as to love.
For it is in giving that we receive,
it is in pardoning that we are pardoned,
and it is in dying that we are born to eternal life.  Amen.