Adapted from 100 Bible Verses That Changed the World, By William and Randy Peterson, pages 73-4, Revel publishing, 2001.

At age 22 William Penn had everything.  He was the son of a respected British admiral, had gone to Oxford, had traveled throughout Europe, and was an expert marksman.  He was also handsome, popular, and on the verge of a bright and lucrative career in law.  In addition, Penn’s family was rich.  His father had sent him to Ireland to manage the family properties there that would someday be his.  There he faced a mutiny, and enjoyed putting down the rebellion so much, that he considered a career in the military.  It seemed every option was available to him.

What he chose shocked everyone.  He chose to become a Quaker, the least understood, most despised, and most persecuted religious group in England.  They dissented against and refused to take part in the official Church of England.  They also refused to take oaths, and thus, would not swear allegiance to king or country.  The authorities frowned on this, so for William Penn to choose this route would most certainly limit his other options.

Most Quakers were passive and bore persecution quietly, but not William Penn.  He was used to being in control; he had, after all, put down that rebellion in Ireland.  He  was not quiet about his religious beliefs, and was arrested and imprisoned several times.

He always spoke in his own defense, challenging the British legal system.  He wrote books, arguing that it was counterproductive for a great nation like Britain to deny religious freedom.  His mighty words would get him out of jail, but he made no impact on the British legal system.  Finally, he grew tired of the conflict.  He, like many others, longed for a new start in America.

The king owed Penn’s late father a large sum of money and had not yet paid it back.  Instead of payment, Penn asked for a grant of land in the New World.  In the middle of the colonies there was a chunk of land that seemed worthless to King Charles, so it seemed to him to provide an opportunity to not only pay off a debt, but also to get rid of some dissenters.  The land was given to William Penn.  He, along with many more Quakers, went there.  Eventually, the place became known as Pennsylvania.

Penn planned to establish a “Holy Settlement” in Pennsylvania to show that faith could really create a new society.  Its chief city would be ‘Philadelphia,’ Greek for ‘city of brotherly love.’  Penn would show the world what people of goodwill could do when guided by their Christian faith.

His settlement had much success in the early years, not the least of which was a perfect relationship with the Native Americans in the area.  While neighboring colonies were constantly raiding and being raided by Indians, not one drop of Quaker blood was shed.  This is because from the beginning, William Penn assured the Native Americans of his good will and respect, and his intention to be fair and honest with them in everything.  He never went back on his word.

William Penn’s ‘Holy Experiment’ did not last much beyond his lifetime.  Without his leadership, the Quakers started fighting among themselves.  They did not have Penn’s power and goodwill to meet the many challenges of life in the New World.  So while the whole of his dream failed, one part, the promise of religious freedom was catching on.  This New World idea found its fullest expression in Pennsylvania, and because it was working there, the idea was adopted in America’s Bill of Rights, signed a century later in William Penn’s own Philadelphia.

What was it that changed William Penn from the powerful and skilled young lawyer who seemed to have the world at his fingertips, to a religious dissenter and an outcast among his own people?  It was a Bible verse.  When Penn was 22 years old, he heard a sermon preached on I John 5:4 which says, “And this is what gives us the victory that overcomes the world– it is our faith.”  Penn wrote later that it was that sermon, on that verse, that changed him, setting his life off in a whole new direction.  It was to be a path that would lead to a profound influence on the founding of this new nation. 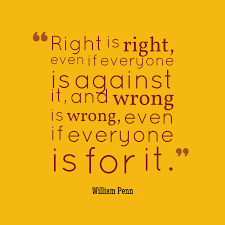 We give back to you, O God, those whom you gave to us.  You did not lose them when you gave them to us, and we do not lose them by their return to you.  Your dear Son has taught us that life is eternal and love cannot die.  So death is only an horizon and an horizon is only the limit of our sight.  Open our eyes to see more clearly, and draw us closer to you, so that we may know that we are nearer to our loved ones who are with you.  You have told us that you are preparing a place for us, prepare us also for that happy place, that where you are we may also be always, O dear Lord of life and death.  Amen.

423) Defending the Early Christians Before the Emperor