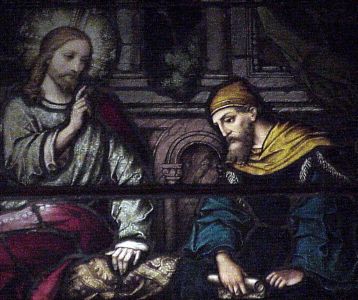 (…continued)  John records no further questions or comments by Nicodemus in this conversation, but I think we can safely assume that Nicodemus liked what he heard from Jesus.  His name appears two more times in the Gospel of John.  In chapter seven, the Jewish ruling council wants to arrest Jesus, and only Nicodemus speaks up in his favor, saying, “Does our law condemn a man without first hearing him to find out what he is doing?”  Then, in John 19, after Jesus is crucified, Nicodemus, along Joseph of Arimathea, arrange for the burial of Jesus.  The Bible says Nicodemus brought 75 pounds of spices for the burial.  That, according to scholars, is far more than the normal amount.  It is what would be used for the burial of a king– which is an indication of what Nicodemus thought of Jesus.  Nicodemus, despite the way Jesus confronted him at first, did apparently become a friend of and believer in Jesus.

In many ways, Jesus challenged and contradicted the understanding of grace and faith that Nicodemus had been taught, but Nicodemus saw in Jesus something special, something true and good and miraculous.  Despite the difficulties in understanding and following Jesus, Nicodemus hung in there, stayed in touch, and kept looking to Jesus.  These three references in John are the only times we read of Nicodemus in the Bible.  There is some evidence in other early sources that Nicodemus joined the early church, and was then executed for his faith in Jesus in the early Roman persecution of the Christians.  The Roman Catholic church and the Eastern Orthodox church list Nicodemus among their saints.

Nicodemus perhaps saw in Jesus a word of God’s grace that was lacking in his Pharisaic beliefs.  Their brand of Judaism had expanded the simple and direct Ten Commandments into 613 rules.  Perfectionists that they were, they wanted to make sure everything was covered.  For example, “Remember the Sabbath Day” was a commandment, and the Bible said you were not to do any work on the Sabbath.  But what exactly did that mean?  They wanted to know.  You had to eat, didn’t you?  Could you prepare food?  So they made this rule:  you may warm up food, but you shall not prepare it on the Sabbath Day.  Do the preparation on the day before so all you have to do on the Sabbath is put it in the microwave.  There was a rule about having to give thanks before a meal, but that led to more rules.  What constituted a meal?  If you have a donut with your coffee break do you have to say a prayer of thanks for that?  The rule they came up with was if what you eat is bigger than an olive, then yes, you have to say a prayer before you eat it.  One more example.  Is it walking considered working, and if so, how far can you walk on the Sabbath day?  Well, there was a rule on precisely how many steps you could take.  Therefore, if you wanted to go somewhere on the Sabbath, you needed to step it off ahead of time to make sure you were not going too far.  This went on and on.

We might be tempted to look down on these Pharisees for this foolish legalism, but they would look down on us for our far too careless and indifferent approach to God’s law.  They most certainly went overboard, and Jesus told them so on more than one occasion.  He criticized them for their hypocrisy, lack of love and mercy, self-righteous pride, spiritual blindness, and so many other things that they had wrong.  But Jesus never criticized them for their obedience.  Jesus did say one time that he did not come to abolish the Law but to fulfill it (though not all the additional laws the Pharisees had invented).

The Pharisees had many things wrong, but they were faithful about saying their prayers, every day and at every meal.  How about you?  Do you see every bit of food as a gift of God and give thanks at every meal?  The Pharisees were faithful about obeying God’s command to worship each and every week.  How about you?  And they were faithful about obeying God’s command to rest one day a week.  Are you?  Or is your Sabbath Day just as hectic as the work week?  The Pharisees thought only about obedience, all the time, and had no time to remember God’s grace.  They went overboard one way.  But to never consider God and his commands for us in our decisions and our daily life is certainly to go overboard the other way.

As a young monk, Martin Luther saw only the judging and condemning face of God, much like the Pharisees.  Then one night as Luther was digging into the Scriptures, he noticed something in Romans chapter four. He saw there that the blessings of God come not from obeying the Law, but that ‘the promise comes by faith.’  But even though Luther was led to a renewed understanding of grace, he also continued to teach that our response to such grace must always be diligent and faithful obedience.

We must not, like the Pharisees, see only the commanding and judging side of God.  But neither should we forget about that.  We should, like Nicodemus, keep our hearts and minds open to all that the Bible says about God– His promises for us and His expectations of us.

John 7:50-51  —  Nicodemus, who had gone to Jesus earlier and who was one of their own number, asked (the ruling council), “Does our law condemn a man without first hearing him to find out what he has been doing?”

Romans 4:14-15a…16a  —  For if those who depend on the law are heirs, faith means nothing and the promise is worthless, because the law brings wrath…  Therefore, the promise comes by faith, so that it may be by grace.

O Almighty Lord and everlasting God, we beseech thee to direct, sanctify, and govern, both our hearts and bodies, in the ways of thy laws, and in the works of thy commandments; that through thy most mighty protection, both here and forever, we may be preserved in body and soul, through Jesus Christ our Lord.  Amen.