The best one-volume introduction to the Christian faith I’ve seen is What’s Christianity All About? by John Schwarz.  There is also a condensed version of this book titled Living Faith (containing approximately 25% of the complete content).  John has given me permission to reprint the entire text of Living Faith on this website.  A chapter a day for ten days will be presented here as Meditations #926-#935.  These meditations will be considerably longer than my usual post, but if you take the time to read them you will receive an excellent overview of the basics of Christianity.  For more thorough study of the subjects in the ten chapters, purchase the larger book What’s Christianity All About? (Print and electronic versions available at Amazon.com). 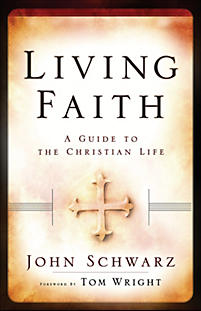 CHAPTER ONE:  THE STORY AND MESSAGE OF THE BIBLE

The English word Bible comes from the Greek word biblia, meaning “books.”  The books in the canon— those books that were accepted by the rabbis and church fathers as Holy Scripture— were written over a twelve-hundred-year period, from 1100 B.C. to A.D. 100.  They were written by more than forty different authors, some of whom are known but most of whom are not, from places like Jerusalem and Babylon in the Old Testament and Corinth and Rome in the New Testament.

The word testament comes from the Latin testamentum, meaning “oath” or “covenant.”  The Old Testament contains the covenant that God made with Israel at Mount Sinai when he said, “If you obey me fully and keep my covenant” (Exodus 19:5).  The New Testament contains the covenant foretold by the prophet Jeremiah when he said, “‘The time is coming,’ declares the Lord, ‘when I will make a new covenant” (Jeremiah. 31:31).  Jesus instituted this covenant at the Last Supper when he told his disciples, “This cup is the new covenant in my blood” (Luke 22:20).

The Old Testament has thirty-nine books in Protestant Bibles, forty-six books in Catholic Bibles (the additional books come from the Septuagint), and fifty books in Eastern Orthodox Bibles (the Catholic Old Testament plus 1 Esdras, 3 Maccabees, the Prayer of Manasseh and Psalm 151).

The Prophetic Books are the collected writings of the four major or longer prophets— Isaiah, Jeremiah (and his Lamentations over the fall of Jerusalem), Ezekiel and Daniel— and the twelve minor or shorter prophets— Hosea, Joel, Amos, Obadiah, Jonah, Micah, Nahum, Habakkuk, Zephaniah, Haggai, Zechariah and Malachi.  The Hebrew Bible calls the minor prophets The Book of the Twelve.

The Writings, which Christian Bibles call the devotional and wisdom literature, are the books of Job, Psalms, Proverbs, Ecclesiastes and the Song of Solomon.

The Greek translation of the Old Testament is called the Septuagint.  According to Jewish legend, seventy-two elders and scribes (six from each of the twelve tribes) went to Alexandria, Egypt, in approximately 250 B.C. and translated the Hebrew Scriptures into Greek so they could be read by Jews living outside Palestine.  (Septuagint comes from septuaginta, Latin for seventy, the nearest round number for the seventy-two translators.)  The Septuagint includes fifteen books that are not in the Hebrew Bible; books like Tobit, Judith, 1 and 2 Maccabees and Baruch.  When Jerome completed his translation of the Hebrew Scriptures into Latin in 405 A.D. , he included several of these books, with a caution from the rabbis with whom he worked that these books should not be considered to be on the same level as the books in the Hebrew canon.  Over time these deuterocanonical (“second canon”) books were accepted by the church; at the Council of Trent (1545-1563), the Roman Catholic Church gave them equal status with the books in the Hebrew canon.

But when Martin Luther and the Reformers translated the Bible into German and other languages, they either omitted these books or put them in a separate section called the Apocrypha, from a Greek word meaning writings of questionable authorship or authenticity, because they had not been received into the Hebrew canon.

Deuterocanonical books like 1 and 2 Maccabees shed light on the years between the two Testaments; other books let us see the development of Jewish thinking regarding the afterlife, which is only briefly alluded to in the Hebrew Scriptures.

The New Testament has twenty-seven books, which are also divided into four sections.

In the Old Testament, the books appear more or less in chronological order.  This is not true in the New Testament.  Paul, who was martyred in Rome in the mid-60s, wrote all of his letters before any of the Gospels, the first of which, many scholars believe, was written around the year 70, and also before the book of Acts, which narrates Paul’s travels.  Further, the letters of Paul are ordered according to length, not date— Romans, the longest Pauline letter, is first in line, though it was one of Paul’s later letters.  And though Matthew has pride of place among the Gospels, most scholars today believe that Mark was the first Gospel to be written.

The basis on which books were accepted into the New Testament canon was threefold.  First, the author had to have been an apostle or a disciple of an apostle, like Mark with Peter and Luke with Paul.  Second, the book had to be consistent with the church’s overall teachings.  Third, the book had to have enjoyed churchwide acceptance and usage.

Christians have good reason to be confident of the New Testament’s reliability and authenticity.  More than five thousand Greek manuscripts of the Scriptures have been found and cataloged, including complete manuscripts dating from the mid-300s, such as the Codex Sinaiticus (discovered at Mount Sinai in 1844 and now in the British Museum in London) and the Codex Vaticanus (now in the Vatican Library in Rome).  Also, the books in the New Testament were written within a generation or two of Jesus’ death.  This contrasts with the miniscule number and late dating of the writings of Plato, Aristotle, Julius Caesar and others in antiquity, which scholars universally accept as authentic.  British scholar John A. T. Robinson, in his book Can We Trust the New Testament?, calls the New Testament “the best-attested text of any writing in the ancient world.”

The Gospels:  The Center of the New Testament

The central narrative of the New Testament is the public ministry, salvational death and bodily resurrection of Jesus of Nazareth.  This narrative is contained in the four Gospels.  Some ask why there are four Gospels rather than one; others ask why there are only four Gospels, because there were “gospels” other than those that made their way into the New Testament, some two dozen in all, such as the gospel of Peter, the gospel of Thomas and the gospel of Philip.  With regard to this question, the gospels that did not make it into the canon were judged by the early church fathers to not have been apostolic in origin or accepted by the church at large.

As to why there are four Gospels and not one, the church fathers felt that our understanding of Jesus would be richer and deeper with all four rather than with only one or with a harmonized gospel such as Tatian’s Diatessaron (“fourfold”), which appeared in the latter half of the second century and remained popular for many years.  The fact that Tatian chose the four canonical Gospels as the basis for his composite gospel testifies to the widespread acceptance of Matthew, Mark, Luke and John over any of the rival gospels that were then beginning to circulate.

The Theme of the Bible

Most scholars believe the Bible has an overall unifying theme.  Some say the theme is that of covenant— the covenants that God made with Israel and through Jesus with all of humankind.  Others say the theme is salvation history— the successive, progressive revelations of God so that all might come to the knowledge of the truth and be saved.  Still others say the theme is promise and fulfillment— God’s promise to David that from his descendants would come one whose “throne shall be established for ever” (2 Samuel 7:16) and the fulfillment of this promise in Jesus, who was from the line of David and who the angel Gabriel told Mary would inherit “the throne of his ancestor David” (Luke 1:32).

The central truth claims of Christianity are that Jesus was God incarnate, that he died a substitutionary death to rightly relate us to God, and that he was raised from the dead to confirm his divine mission.  Is there any evidence that Jesus rose from the dead?  The surest evidence is the witness of those who were martyred for their faith.  Why is this evidence?  Because, as Paul Little says in his book Know What You Believe, “People will die for what they believe is true, but no one willingly dies [as did Peter and Paul in Rome and others throughout the Roman Empire] for what they know is false.”

The Translations of the Bible

In Jesus’ day, the Scriptures were scrolls, such as the Isaiah scroll that Jesus read in the synagogue at Nazareth (Luke 4:17-21).  They were written on papyrus, a plant that grew along the Nile River; later on parchment, made from the skins of goats and sheep; and finally on paper.  In the second century, Bibles were produced with pages that could be turned.  With the invention of the printing press by Johann Gutenberg in 1456, the production of Bibles moved from handwriting to movable type.

The earliest Bibles were written in Greek.  When the church moved west, there was need for an authoritative Latin translation, which was completed by Jerome, the most accomplished linguist of his day, in 405 A.D.  Jerome’s Bible came to be called the Vulgate, from a Latin word meaning “common” or “ordinary” language.  The first translation of the Bible into English was completed by John Wycliffe in 1382.  The King James Bible of 1611, authorized by King James of England (who reigned from 1603 to 1625), became the Protestant Bible of the English-speaking world until well into the twentieth century, and its popularity continues even today.  The twentieth century saw more than one hundred new translations.  Reasons for this included the discovery of new information about first-century Israel from archaeological finds, such as the Dead Sea Scrolls; the discovery of better manuscripts from which to translate, such as the Codex Sinaiticus; and the need to update certain words used in biblical translations, such as Thee and Thou, and to make the Bible more gender-inclusive.

The following are some “helps” in reading the Bible.

The New Revised Standard Version (NRSV, 1989) is considered by many to be the most faithful rendering of the Greek text.  It claims to be “as literal as possible, as free as necessary” (from the preface to the NRSV).  Today’s English Version (TEV, 1976) or the Good News Bible or Good News Translation (1992) is a sixth-grade reading level paraphrase rather than a word-for-word translation.  The New International Version (NIV, 1984), the most popular Bible in terms of sales, is intentionally conservative and widely used by evangelicals.  The New Living Translation (NLT, 1996) is a popular junior-high reading level “thought-for-thought” translation.  The Message (2002) is a contemporary paraphrase that uses modern-day words and terms.

598) A Life of Service and Thanksgiving