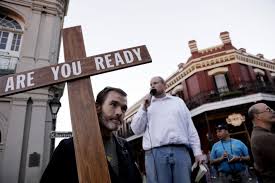 From Following Jesus Without Embarrassing God, by Tony Campolo, 1997, pages 273-4:

(…continued)  Some years ago my wife and I had a stopover in Honolulu on our way home from a preaching mission in Australia.  We had just enough time to take a walk along Waikiki Beach.  On our walk we came upon a middle-aged man with long hair and bare feet, holding an open Bible in one hand, and pointing at passersby with the other.  Every so often, he would let fly with a long list of “Woe unto yous.”  Undoubtedly you’ve seen the crazy-looking type of person I’m talking about.  You find them on the street corners of most major cities.  As we strolled out of range of this wild man’s ranting and raving, I said to my wife, “It’s guys like him who disgrace the gospel!  There ought to be some way of stopping people like that.  It’s stuff like he’s doing that turns people off to Christianity!”

An hour or so later Peggy and I were walking back down the beach to catch the bus that would return us to the airport.  We passed the same crazy man.  But he wasn’t preaching anymore.  Instead, he was praying with two rather dignified-looking men who were dressed in business suits, each with a briefcase.  He had his arms around their shoulders, and we heard enough of the prayer to know that those two men were inviting Jesus into their lives.

I walked the rest of the way to the bus stop in silence as I asked myself, “Well, Campolo?  How many people did you lead to Christ today?…”

In our attempt to be accepted by those who seem to be more sophisticated than we are, we sometimes allow ourselves to become despisers of sincere people who use what we consider to be low-class techniques for evangelism.  We must never lose sight of the fact that God uses all kinds of ways to touch the hearts of all kinds of people.

One of the most touching stories I know was told to me by a pastor friend from Atlanta, Georgia.  He relates how, one Wednesday evening at a prayer meeting at his church, a man gave testimony as to how he had become a Christian while in Sydney, Australia.

The man said, “I was at the street corner in Kings Cross when I felt a tug on my sleeve.  I turned and found myself face to face with a street bum.  Before I could say anything, the man simply asked me, ‘Mister, if you were to die tonight, where would you spend eternity?’  That question troubled me over the next three weeks,” the man continued.  “I had to find an answer, and I ended up giving my life to Christ.”

My minister friend went on to tell me that, three years later, another man came to one of his Wednesday night prayer meetings and gave almost an identical testimony.  He, too, had been at Kings Cross in Sydney, when a derelict had pulled on his sleeve and then asked him if he were to die that night, where would he spend eternity.  This second man too explained that the question so haunted him that he eventually sought and found an answer in Jesus.

It wasn’t too long after that when my pastor friend himself had to be in Sydney for a church conference.  On one of his nights off, he decided to go to Kings Cross and see if he could find the man who had been mentioned at his prayer meeting by two different people.  He was standing on a corner in Kings Cross when he felt someone tug on his jacket.  He turned, and before the poor old man could ask him anything, he said, “I know what you’re going to ask me!  You’re going to ask me if I were to die, tonight where would I spend eternity?”

The man was stunned.  “How did you know that?” he inquired.  My pastor friend told him the whole story.  As he finished, the man started to cry.  “Mister,” he said, “ten years ago I gave my life to Jesus, and I wanted to do something for Him.  But a man like me can’t do much of anything, so I decided I would just hang out on this corner and ask people that simple question.  I’ve been doing that for years, mister, but tonight is the first time I ever knew it did anybody any good.”

All of this leads me to a simple conclusion:  Let each of us judge ourselves, making sure that we live out our convictions with as much consistency, honesty, and intelligence as possible.  And let none of us be condescending or judgmental toward those who are trying to do the same, even when they seem a bit foolish in our eyes.  Let each of us be as wise as serpents as we judge ourselves, and as gentle as doves when it comes to judging others.  What some of us might deem foolish or embarrassing may, in reality, be profoundly effective.  It’s one thing to be an embarrassment to God as we follow Jesus; it’s something else entirely to be an embarrassment for God.  Let us pray for the courage to be willing to be embarrassed for God.

1 Corinthians 4:10  —   We are fools for Christ, but you are so wise in Christ!  We are weak, but you are strong!  You are honored, we are dishonored!

Philippians 1:15-18  —   It is true that some preach Christ out of envy and rivalry, but others out of goodwill.  The latter do so out of love, knowing that I am put here for the defense of the gospel.  The former preach Christ out of selfish ambition, not sincerely, supposing that they can stir up trouble for me while I am in chains.  But what does it matter?  The important thing is that in every way, whether from false motives or true, Christ is preached.  And because of this I rejoice.

Lord, today you made us known to friends we did not know,

And you have given us seats in homes which are not our own.

You have brought the distant near,

And made a brother of a stranger,

We did not introduce you.