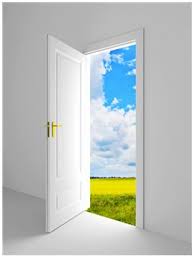 When five-year-old Emily Kimball was hospitalized and heard she was going to die, she started to cry.  Even though she loved Jesus and wanted to be with him, she didn’t want to leave her family behind.  Then her mother had an inspired idea.  She asked Emily to step through a doorway into another room, and she closed the door behind her.  One at a time, the entire family started coming through the door to join her.  Her mother explained that this was how it would be.  Emily would go ahead to Heaven and then the rest of the family would follow.  Emily understood.  She would be the first to go through death’s door.  Eventually, the rest of the family would follow, probably one by one, joining her on the other side.

The analogy would have been even more complete if the room that Emily entered had had someone representing Jesus to greet her—along with departed loved ones and angels.  Also, it would’ve helped if the room she walked into was breathtakingly beautiful, and contained pictures of a New Earth, vast and unexplored, where Emily and her family and friends would one day go to live with Jesus forever.

Every person reading this blog is dying.  Perhaps you have reason to believe that death will come very soon.  You may be troubled, feeling uncertain, or unready to leave.  Make sure of your relationship with Jesus Christ.  Be certain that you’re trusting him alone to save you—not anyone or anything else, and certainly not any good works you’ve done.  And then allow yourself to get excited about what’s on the other side of death’s door.

I’ve often read at memorial services this depiction of a believer’s death:

I’m standing on the seashore.  A ship at my side spreads her white sails to the morning breeze and starts for the blue ocean.  She’s an object of beauty and strength and I stand and watch her until, at length, she hangs like a speck of white cloud just where the sea and the sky come down to mingle with each other.  And then I hear someone at my side saying, “There, she’s gone.”

Gone where?  Gone from my sight, that is all.  She is just as large in mast and hull and spar as she was when she left my side.  And just as able to bear her load of living freight to the place of destination.  Her diminished size is in me, not in her.

And just at the moment when someone at my side says, “There, she’s gone,” there are other eyes watching her coming, and there are other voices ready to take up the glad shout, “Here she comes!”

And that is dying.  –source uncertain

Five months before he died, C. S. Lewis wrote to a woman who feared that her own death was imminent.  Lewis said, “Can you not see death as a friend and deliverer? . . . What is there to be afraid of? . . .Your sins are confessed. . . . Has this world been so kind to you that you should leave with regret?  There are better things ahead than any we leave behind. . . . Our Lord says to you, ‘Peace, child, peace.  Relax.  Let go.  I will catch you.  Do you trust me so little?’ . . . Of course, this may not be the end.  Then make it a good rehearsal.”  Lewis signed the letter, “Yours (and like you, a tired traveler, near the journey’s end).” (Letters to An American Lady, page 117)

We see life differently when we realize that death isn’t a wall but a turnstile; a small obstacle that marks a great beginning.  Calvin Miller put it beautifully (The Divine Symphony, Bethany Publishers, 2000. page 139):

I once scorned ev’ry fearful thought of death,
When it was but the end of pulse and breath,
But now my eyes have seen that past the pain
There is a world that’s waiting to be claimed.
Earthmaker, Holy, let me now depart,
For living’s such a temporary art.
And dying is but getting dressed for God,
Our graves are merely doorways cut in sod.

Matthew 4:17  —  From that time on Jesus began to preach, “Repent, for the kingdom of heaven has come near.”

1 Peter 1:3-5  —  Praise be to the God and Father of our Lord Jesus Christ!  In his great mercy he has given us new birth into a living hope through the resurrection of Jesus Christ from the dead, and into an inheritance that can never perish, spoil or fade.  This inheritance is kept in heaven for you, who through faith are shielded by God’s power until the coming of the salvation that is ready to be revealed in the last time.

2 Peter 3:13  —  But in keeping with his promise we are looking forward to a new heaven and a new earth, where righteousness dwells.

Heavenly Father, your Son has promised that he is preparing a place for us.  Prepare us also for that place in your home.  In the name of Jesus we pray.  Amen.