SLOOP JOHN B by The Beach Boys

We come on the Sloop John B, my grandfather and me.
Around Nassau town we did roam.
Drinking all night, got into a fight, Well I feel so broke up, I want to go home.

The first mate, he got drunk, broke up the people’s trunk,
The constable had to come and take him away.
Sheriff John Stone, why don’t you leave me alone?
Well I feel so broke up, I want to go home. (Chorus)

The poor cook he caught the fits, threw away all my grits,
Then he took and ate up all of my corn. Let me go home, I want to go home,
This is the worst trip I’ve ever been on. (Chorus) 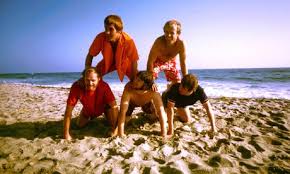 Listen to Sloop John B at:

“Sloop John B” was recorded by the Beach Boys in 1966 and got as high as #3 on the charts.  Brian Wilson did his own arrangement of a traditional West Indies song from the early 1900’s.  The song was based on a true story about a boat in the Bahamas that went out to sea to collect sponges to sell.  The crew had a reputation for partying and that is believed to have had something to do with the boat’s sinking in 1900.  Several other artists recorded this song including Johnny Cash in 1959, but the Beach Boys version is by far the best.

Most of the song doesn’t apply to what I am doing in these meditations, but there is one line in the refrain that says exactly what I want to say.  It is the most memorable line of the song, and, it is the line Johnny Cash used for the title of his recording:  “I want to go home.”  Some other good lines are, “Let me go home, I want to go home; this is the worst trip I’ve ever been on; well, I feel so broke up, I want to go home.”

There is something in us that needs a home.  There may be a lot of people in that home, or there may not be anybody there at all, but it is our home, and we need it.  ‘Home sweet home,’ we say.  ‘Home is where the heart is.’  ‘Home is where’ (as Robert Frost said), ‘when you have to go there, they have to take you in.’  For many, home is not a pleasant place at all, but God would want us to have a good home.

Memories of the home in which we grew up, good and bad, are always with us.  I remember an old man who I visited after his son committed suicide.  The son’s alcoholism had ruined his family and he was divorced.  He seldom saw his children, and he was alone in a distant city when he took his life.  His elderly father was all he had left.  He left his dad a note, which the old man showed me. “Dad,” it said, “life was good growing up at home with you and mom.  I so often have wished I could go back to those years and be home with you again.”

“Let me go home,“ sing the Beach Boys, “I feel so broke up, I want to go home.”  God’s Word has much to say about home.  Our home and family right now are gifts of God, imperfect as they are.  And in John 14 when Jesus is talking about death, he doesn’t even use the word.  Rather, he describes it as him taking us to his perfect home.  That is what death is for the believer, going home.  “In my father’s house,” Jesus said, “are many rooms.  Trust me and believe in me.  I am going there to prepare a place for you; and I will return for you and take you to my home, so that where I am, you may be also.”  A loving home is what we want most of all in this life, and that is what God has promised us in the life to come.

When I visit people in the nursing home, many tell me that what they miss most of all is being in their own home.  I often remind them that they are nearing the time when they will go on to a better home than they could ever dream of; a home prepared for them by Jesus himself.  “Let me go home, I want to go home; I feel so broke up, I want to go home.”  What a great line, and what a great tune; and what a great promise.

John 14:1-3  —  (Jesus said),  “Do not let your hearts be troubled.  You believe in God; believe also in me.  My Father’s house has many rooms; if that were not so, would I have told you that I am going there to prepare a place for you?  And if I go and prepare a place for you, I will come back and take you to be with me that you also may be where I am.”

Revelation 21:3-4  —  I heard a loud voice shout from the throne:  “God’s home is now with his people.  He will live with them, and they will be his own.  Yes, God will make his home among his people.  He will wipe all tears from their eyes, and there will be no more death, suffering, crying, or pain.  These things of the past are gone forever.”  (CEV)

Eternal Father, who hast given
To homes on earth foretaste of heaven,
Whose gentle Spirit from above
Doth breathe Thy peace in hearts that love;
While here we bide, or far we roam,
Hear this our prayer: God Bless Our Home!
–Robert Freeman (1878-1940)