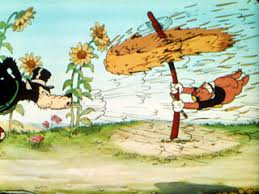 Once upon a time, there were three little pigs.  One day all three of them decided they would build a house.  The first two little pigs took the inexpensive, fast, and easy way; the first, building his house out of straw, and the second building his house out of sticks.  The third little pig took much more time, and spent far more money than the other two, as he built his house out of bricks.  The first two pigs had a lot of time to go over and make fun of the other one.  “Why work so hard and spend so much money,” they said, “we are doing just fine in our little houses.”  And they had a point.  They HAD been getting along very nicely in their own inexpensive new homes– so far.  They had not thought about bad weather or other possible threats to their home and safety.

In both stories, there are wise and foolish builders, and both stories are, of course, pointing to greater truths than just how to build houses.  Whether you are building or buying, getting a solid house is very important.  For most people, the purchase of a home is the largest purchase they will make in their entire lives.  But there are some things in life that are even more important than building a solid house, and one of those things is the building of a solid life.  In the parable of the wise and foolish builders, Jesus is illustrating the importance of building a solid life.  The parable comes at the very end of the Sermon on the Mount, three chapters in which Jesus teaches us how to live an faithful, obedient, godly, and solid life.  Then Jesus tells this parable about the wisdom of building a house on a solid foundation, and he begins the parable with these words: “Therefore, everyone who hears these words of mine and puts them into practice is like a wise man who built his house on the rock.”  You build a solid life by not only listening to the words of Jesus, but also by putting them into practice.

As you might recall, Jesus never had much time for death, and so whenever Jesus was talking about life, he was talking about all of life– life in the here and now, and, eternal life.  “I have come that you might have life,” he said, “and have it abundantly.”  “I am,” he said, “the resurrection and the life– he who believes in me, though he die, yet he shall live again.”  So, when Jesus talks about building a solid life, he is talking about not only building for the ‘here and now,’ but for all eternity.

In I Corinthians 3 Paul also uses the illustration of building, writing, “By the grace God has given me, I laid the foundation as an expert builder, and someone else is building on it.  But each one should be careful how he builds.  For no one can lay any foundation other than the one already laid, which is Jesus Christ.”  Jesus Christ is the only foundation which will last, Paul says, adding that it will not work to build with straw or wood, or even gold or silver.  When that Last Day comes, Paul goes on to say, only what is built on Jesus Christ will survive.  The wise person will build their life now on the words of Jesus, and will put their hope for eternal life on the promises of Jesus.  This will put them on a solid foundation.

The foolish person will build on other things.  The foolish person will pay very close attention to interest rates, but little or no attention to God.  They will follow closely the ups and downs of the stock market, but have no time for worship or prayer.  They will know all about how the Twins and the Vikings are doing, but have no enthusiasm for the mission of God, and how that is doing in the world today.  They will spend many hours looking for the very best car and the very best deal, and they will know just what they are getting, but they will have the flimsiest and foggiest ideas about God and eternal life.  (continued…)

I Corinthians 3:11-13 — For no one can lay any foundation other than the one already laid, which is Jesus Christ. If any man builds on this foundation using gold, silver, costly stones, wood, hay or straw, his work will be shown for what it is, because the Day will bring it to light.

Almighty God, whom truly to know is everlasting life:  Grant us so perfectly to know your Son Jesus Christ to be the way, the truth, and the life, that we may steadfastly follow his steps in the way that leads to eternal life; through Jesus Christ your Son our Lord, who lives and reigns with you, in the unity of the Holy Spirit, one God, forever and ever.  Amen.   —Book of Common Prayer