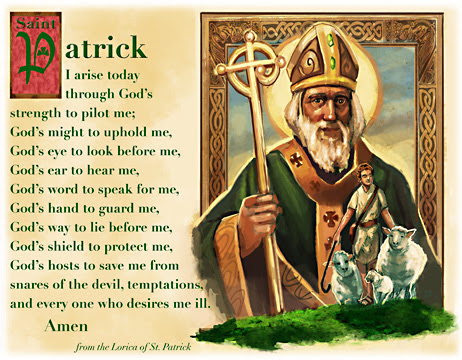 First of all, there are a couple things that everybody thinks they know about St. Patrick that are in fact false.  When you think of Patrick, you think Irish and you think Catholic.  But Patrick was not an Irishman, and he is remembered and honored not only by Catholics, but by all Christians.

First of all, Patrick was an Englishman, born and raised in England.  Secondly, Patrick is honored by all of Christendom because when he lived and died the Catholic Church was ALL of Christendom.  I am a Lutheran, and we Lutherans trace our history back to about 1517.  But the other fifteen centuries of our Christian heritage we share with the Roman Catholics.  Patrick was a part of that earlier history.  So, we Lutherans also honor him, and he is listed in our hymnal under ‘Festivals and Commemorations’ (March 17), as “Patrick, Bishop, Missionary to Ireland, 461.”

Patrick was born in 389 A.D. in a town on the western coast of England.  His father was a deacon in the church in the Catholic Church and his grandfather was a priest.  Priests could marry in those days, as the rule on celibacy for priests did not come until four centuries later.  Patrick was a privileged youth, who could have looked forward to an education, a good career, and a comfortable life.

But there were dangers.  Bands of raiders would often descend upon unsuspecting coastal villages, rob them of everything, and carry off into slavery anyone they didn’t kill who was healthy and strong enough to work.  Some of the fiercest and most feared of these raiders were the Irish.  When Patrick was sixteen years old, he was captured in one of these attacks and taken to Ireland.  There he was sold as a slave to an area ‘king,’ or chief, ruling over several families.  There were many such local chiefs in Ireland, often at war with each other, and the only law was ‘might makes right.’

The slave boy Patrick was sent out to work as a shepherd.  Shepherds were not well clothed or adequately fed, and years later Patrick wrote that he was “chastened and humbled greatly by daily hunger and nakedness.”  It was also lonely, as shepherds were often isolated for weeks, or even months at a time.  And, it was dangerous work.  Anyone he did meet could be an enemy, anxious to kill him and steal his flock.  Many such slaves died young.

Patrick lived like that for six years.  During that time he learned to trust in God and to pray.  Before his capture Patrick had little time for religion and paid no attention to God.  He thought priests were fools, even though his father and grandfather served the church.  In England he had decided that he did not and would not believe in God.

All of that changed on those desolate Irish hillsides.  His misfortune and desperate circumstances made him think again about God.  He recalled and returned to the faith of his father and grandfather, and turned to God in prayer.  He later wrote that his intense suffering brought him back to Jesus.  He wrote:  “Tending flocks was my daily work, and I would pray constantly during the daylight hours; and the love of God grew in me and surrounded me and more and more there was no sluggishness in my spirit.”

One night while sleeping, Patrick dreamed of hearing a voice that said:  “Your desires will be rewarded.  You are going home.”  Patrick woke up, startled, and rose to his feet.  Then, the voice spoke again, saying, “Look, your ship is ready.”

The problem was there were no ships in the area.  The farm on which Patrick worked was many miles inland, and he had no idea where he was or which way he would go to find the sea, let alone a port and ships.  Even so, believing it was God’s voice, Patrick started walking.  He walked over a hundred miles.  Miraculously, he was not followed and he was not stopped.  Finally, he reached the sea, and miraculously, there was a ship.

Then, Patrick had some trouble boarding the ship.  The captain refused to let him on and sent him away, but again God helped Patrick and the captain called him back.  Soon, Patrick was on his way—but not yet to England.  First, the ship went to France where Patrick endured more difficulties.  After a few more years, Patrick did get back to England and back to his surprised parents.  They were overjoyed to see him, and prayed that he would never have to leave them again.

Patrick, however, had been gone too long, and no longer felt at home in his home town.  He was physically and emotionally strong, but was uneducated, and was restless.

One night while still with his parents, Patrick had a dream about a man from Ireland who came carrying many letters.  The letter on the top said, “The Voice of the Irish.”  Patrick then heard a voice that said, “We beg you to come and walk among us once more.”  Patrick continued having such dreams, or visions, and one night he heard a voice saying, “He who gave his life for you, he it is who is speaking within you.”  It was, he believed, the voice of God speaking in those visions.

Patrick decided to go back to Ireland to tell the Irish about Jesus.  He knew he would first need to enter a monastery to study the Bible and theology.  With very little previous education, Patrick struggled as a student, but finally became a priest.  He was then ordained as a “Missionary Bishop to the Irish,’ among whom there had been very little previous Christian work.

In 431, at the age of 42, Patrick returned to Ireland as a missionary priest.  There he would work for thirty years, until his death there in 461.  (continued…)