The strongest argument for the Gospel of Christ is the personal testimony of someone whose life has been changed by it.  The changed lives of Christians does not prove the historical truth of Christianity, but it is an important piece of supportive evidence; and, it is consistent with the Biblical promises and descriptions of what can happen when someone comes to faith in Jesus Christ.

In the later part of the nineteenth century, political activist Charles Bradlaugh (1833-1891) was one of the most outspoken atheists in London.  During those same years, down in one of the slums of London, was a Christian evangelist by the name of Hugh Price Hughes (1847-1902).  Hughes was investing his life in the poor people of London.  He had gone to those who were alcoholics and others who did not have a place in society.  He started homes for women who had been abused, and many other ministries to those who were down and out.  All London was aware of the miracles of grace accomplished at his rescue mission.

The atheist Charles Bradlaugh publicly challenged this Rev. Hughes to a debate on the existence of God and the truth of Christianity.  Both men were well known, and London was greatly interested.  What would Hughes do?  Hughes told Bradlaugh he would agree to the debate on one condition.

Bradlaugh was a lawyer, and Hughes pointed out that in a court of law you are always allowed to bring witnesses.  Hughes therefore agreed to debate Bradlaugh if Hughes could bring one hundred witnesses-– people whose lives had been changed because of the existence of God and the truth of Christianity.  They would be people who once lived deep in sin, some having come from poverty-stricken homes caused by the vices of their parents.  Hughes said these people would not only tell of their conversion and how their lives have been improved since trusting in Jesus Christ as their Savior, but would also submit to cross-examination by any who doubted their stories.

Hughes told Bradlaugh that he could also bring one hundred witnesses, non-believers whose lives had been changed because there was no God, and they could tell how they have been helped by their lack of faith.  Hughes said, “I propose to you that we each bring some concrete evidences of the validity of our beliefs in the form of men and women who have been redeemed from the lives of sin and shame by the influence of our teaching.  I will bring one hundred such men and women, and I challenge you to do the same.  If you cannot bring one hundred, Mr. Bradlaugh, to match my one hundred, I will be satisfied if you will bring fifty men and women who will stand and testify that they have been lifted up from lives of shame by the influence of your teachings.  And if you cannot bring fifty, then bring twenty people who will say, as my one hundred will, that they have a great joy in a life of self-respect as a result of your atheistic teachings.  And if you cannot bring twenty, I will be satisfied if you bring ten.  Nay, Mr. Bradlaugh, I challenge you to bring even one, just one man or woman who will make such a testimony regarding the uplifting of your atheistic teachings.”  All Bradlaugh had to do was to find one person whose life was improved be atheism, and Hughes, who could bring one hundred people improved by Christ, would agree to debate him. 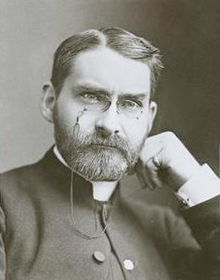 The ‘evidence;’ early residents of the West London Mission whose lives were improved by knowing Jesus

“It is because the spirit of Christ has not been introduced into public life that Europe is in a perilous condition today. . . My wish is to apply Christianity to every aspect of life.”

The West London Mission continues to serve the needy today.  This is from their website:

The West London Mission was established in 1887 as part of a new initiative within Methodism – the mission movement, which combined evangelism with radical social action.  The driving force behind WLM was the Rev. Hugh Price Hughes.  The opening service was held in October 1887 in St James’ Hall, Piccadilly, and over 2,000 would come to services each Sunday.  At that time the West End was rife with poverty and vice alongside great wealth and riches.  WLM developed a wide range of ‘social rescue’ alongside their religious activities.  Early work included ministering to the sick, a dispensary, a nursery, children’s clubs, a soup kitchen, a ‘poor man’s lawyer’ and a hospice.  Hostels and homes were run for unmarried mothers and their babies, ex-offenders, those on bail, elderly people, and recovering alcoholics– all pioneering projects long before any general public provision.  Professional social work of high standard, alongside a worshipping centre and a strong Christian motivation are WLM principles that continue today.

I Peter 3:14-16  —  But even if you should suffer for what is right, you are blessed. “Do not fear their threats; do not be frightened.”  But in your hearts revere Christ as Lord.  Always be prepared to give an answer to everyone who asks you to give the reason for the hope that you have.  But do this with gentleness and respect, keeping a clear conscience, so that those who speak maliciously against your good behavior in Christ may be ashamed of their slander.

Matthew 5:16  —  (Jesus said), “Let your light shine before others, that they may see your good deeds and glorify your Father in heaven.”

Romans 12:9-13  —  Love must be sincere.  Hate what is evil; cling to what is good.  Be devoted to one another in love.  Honor one another above yourselves.  Never be lacking in zeal, but keep your spiritual fervor, serving the Lord.  Be joyful in hope, patient in affliction, faithful in prayer.  Share with the Lord’s people who are in need.  Practice hospitality.

O loving Father, we pray for all who get left behind in the race of life.  We pray for those worn with sickness and misery, those wasted with addiction, for the dying, and for all unhappy children.  May they come to know the suffering love of Christ, and may they have a heart that trusts you even in the dark.  We ask this in the name of Him who took our infirmaties upon himself, Jesus Christ our Lord and Savior.  Amen.

1240) Mourning the Loss of Faith in His Homeland