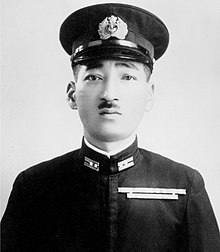 Mitsuo Fuchida was born on December 3, 1902 in Nagao, Japan.  Thirty-nine years and four days later he led the Japanese attack on Pearl Harbor.  His story, told in his own words, tells of the mark he left on history— and the mark God left on him.

I must admit I was more excited than usual as I awoke that morning at 3:00 a.m. Hawaii time.  As General Commander of the Air Squadron, I made last minute checks on the intelligence information reports in the Operations Room before going to warm up my single-engine three-seater plane.

The sunrise in the east was magnificent above the white clouds as I led 360 planes towards Hawaii.  I knew my objective:  to surprise and cripple the American naval force in the Pacific.

Like a hurricane out of nowhere, my torpedo planes, dive-bombers, and fighters struck suddenly with indescribable fury.  It was the most thrilling exploit of my career…

Four years later, when the war ended, it was the end of my military career.  I became more and more unhappy, especially when the war crime trials opened in Tokyo.  Though I was never accused, General Douglas MacArthur summoned me to testify on several occasions.

As I got off the train one day in Tokyo’s Shibuya Station, I saw an American distributing literature.  He handed me a pamphlet entitled “I Was a Prisoner of Japan.”  What I read eventually changed my life.  On that Sunday while I was in the air over Pearl Harbor, an American soldier named Jacob DeShazer had been on K.P. duty in an army camp in California.  When the radio announced the sneak attack which demolished Pearl Harbor, he shouted “Japs, just wait and see what we’re going to do to you.”

One month later he volunteered for a secret mission with the Jimmy Doolittle Squadron– a surprise raid on Tokyo.  After the bombing raid, they flew on towards China but ran out of fuel and were forced to parachute into Japanese-held territory.  During the next 40 long months in confinement, DeShazer was cruelly treated.  After 25 months the U.S. prisoners were given a Bible to read…  There in a Japanese P.O.W. camp, he read and read— and eventually came to understand that the book was more than a historical classic.

After DeShazer was released, he returned to Japan as a missionary, and in God’s providence gave Fuchida the tract he had written.  Fuchida continues:

The peaceful motivation I had read about in the pamphlet was exactly what I was seeking.  Since the American had found it in the Bible, I decided to purchase one myself, despite my traditional Buddhist heritage.

In the weeks that followed I read this book eagerly.  I came to the climactic drama— the Crucifixion.  I read in Luke 23:34 the prayer of Jesus Christ at His death: “Father, forgive them for they know not what they do.”  I was impressed that I was certainly one of those for whom He had prayed.  The many men I had killed had been slaughtered in the name of patriotism, for I did not yet know anything about the love of Christ  that he wishes to implant within every heart.

Right at that moment I seemed to meet Jesus for the first time.  I understood the meaning of His death as a substitute for my wickedness; and so in prayer, I requested Him to forgive my sins, and change me from a bitter, disillusioned ex-pilot into a well-balanced Christian with purpose in living…

I believe with all my heart that those who will direct Japan— and all other nations— in the decades to come must not ignore the message of Christ.  He is the only hope for this troubled world.

For Jacob Deshazer’s story  go to:

I Timothy 1:13-14  —  Even though I was once a blasphemer and a persecutor and a violent man, I was shown mercy because I acted in ignorance and unbelief.  The grace of our Lord was poured out on me abundantly, along with the faith and love that are in Christ Jesus.

I Timothy 1:15-16  —  Here is a trustworthy saying that deserves full acceptance:  Christ Jesus came into the world to save sinners— of whom I am the worst.  But for that very reason I was shown mercy so that in me, the worst of sinners, Christ Jesus might display his immense patience as an example for those who would believe in him and receive eternal life.

Romans 5:10  —  For if, while we were God’s enemies, we were reconciled to him through the death of his Son, how much more, having been reconciled, shall we be saved through his life!

“Father, forgive them, for they know not what they do.”