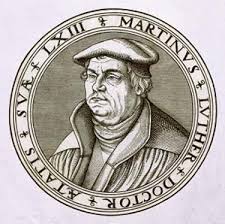 The husband and wife team of Will and Ariel Durant made it their life’s work to write the history of the whole world, from life in the caves to life in skyscrapers, from crude markings on the sides of cliffs to the age of the computer.  The result of that effort, which the Durants worked on for over fifty years, was eleven huge volumes, each containing 800 to 1,000 pages.  They both died in 1981, their work unfinished, having gotten only as far as the early 1800’s.  The title of this monumental work is The Story of Civilization, and each volume tells the story of an important era in human history.  There is a volume on the Greek civilization and one on the Oriental cultures and one on the Roman empire and the beginnings of the early Christian Church, and so on.  Volume Six of that set is entitled The Reformation, indicating the Durants’ view that the Reformation of the church was one of the eleven most significant and influential time periods in all of human history.

On October 31, 1517, 498 years ago last Saturday, this world changing Reformation began with a single bold act by a chubby little monk in the small, remote city of Wittenberg, Germany.

When Martin Luther nailed the 95 thesis to the church door in Wittenberg, he had no idea that the results of that act would reach around the world, and in four centuries, merit an entire volume in The Story of Civilization.  He was simply doing what scholars in that university town often did, posting their opinions in that very public place to invite discussion and debate.  The closest thing to this practice today would be the writing of letters to the editor of the local newspaper to inform, and to invite the opinions of others.

Luther certainly received the discussion and debate that he was after.  The challenges he made were theological and scholarly, but they went to the heart of much of what the medieval church had come to stand for.  And since church and state were so interwoven in those days, anything that threatened the way the church did business, also threatened the way the state did business.  And the kinds of things Luther was talking about changing, could, and would, lead to the unraveling of the whole business, the whole medieval way of life.  Many people in the church and in politics were more than ready for just such an unraveling.  Luther provided the spark that ignited a cultural revolution that changed everything:  from dividing the one catholic church into dozens of denominations, to separating church and state, to redefining the sources of authority in society, to leading (eventually) to the establishment of individual rights, to providing the Bible in the language of the common person.  Many things that we take for granted in our church, and in our whole society, were unheard of before the Reformation, but were well on their way to becoming a part of life by the time of Luther’s death 28 years later.

I did an internet search of the most influential people of the last thousand years.  I found four lists.  Martin Luther was in third place on all four lists.  This is not just religious leaders.  This is out of everyone, in every area, in the whole world, for a thousand years.  Only two people were considered to be more influential than Martin Luther.

Luther was by far the most influential reformer, but only the first of many.  Ulrich Zwingli, John Calvin, Philip Melanchthon, and many more were to follow; and so were their writings.  The Reformation brought forth a flood of books and sermons and other writings, as all of theology was rethought and presented in new and more Gospel-centered ways.  “The truth shall set you free,” said Jesus in John 8:32, and it was that freedom of the Gospel that Luther rediscovered and the Reformers never tired of proclaiming.  The whole church, indeed, the whole world and all of life would be seen from a new perspective.  Page after page poured forth– 120 volumes by Luther alone.

Much of that tremendous output is as not nearly as important now as it was when it was first written.  Every age has its own unique challenges, and important writings in one age will not necessarily be important or even meaningful in another time and place.  Luther himself had hoped that none of his writings would be saved.  It was, he believed, the work of every new generation to proclaim the Gospel in their own way in their own time.  Luther’s writings have been preserved, though half of it has not been translated into English; and most of the 54 volumes that have been translated into English are read only by scholars, some by pastors, and a few have a bit wider audience.

But one piece of Luther’s work is still read by millions– his Small Catechism.  Luther would have approved of this wide and continued usage.  He considered this little pamphlet his favorite and most important work.

This is because along with being a courageous leader and world-changing reformer, Luther was primarily a pastor and a teacher.  He was therefore concerned about the spiritual well-being of his people; and his ‘people,’ or sphere of influence, soon included all of Germany, and then, all of Europe.  When he started looking around at the church outside his life in Wittenberg, he was appalled at what he found.  Out in the country the churches were in horrible shape.  In his preface to the Small Catechism, he wrote that most people did not even know the simplest things, like the Lord’s Prayer, the Creed, or the Ten Commandments, and they had no understanding at all of the Gospel of God’s grace and gift of salvation.  The clergy were often of little help.  Many of them, he found, did not know the Lord’s Prayer or the Creed either.

So Martin Luther, who was used to writing mostly long and deep and complex theological treatises, went to work on something short and simple.  In the Spring of 1529 the Small Catechism was published, and this little book has been the primary text for the Christian education of Lutheran young people ever since.

The catechism has five parts, what Luther considered the five basics of the Christian faith that everyone should know something about.  Part One is the Ten Commandments, outlining how God wants us to live.  Part Two is the Apostle’s Creed, a summary of what we believe.  Part Three is the Lord’s Prayer, the prayer Jesus himself taught us to pray, and the best example of how we should speak to God in prayer.  Parts Four and Five describe the two Sacraments; the Sacrament of Baptism, by which God gives us his eternal promise, and the Sacrament of Holy Communion, in which God repeats his promise, forgives our sins, and reminds us of Christ’s sacrifice for us.  In the Small Catechism, the common person was instructed in what God’s Word said about how to live a Christian life, and how to die with hope in the promises of God.

Another of Luther’s great accomplishments was the translation of the Bible into German, so that everyone could read it.  We take for granted that we can read the Bible in our own language, but in Luther’s time, that was a radical, even illegal, innovation.  Luther had to go into hiding in order to do this work.  He was a hunted man with a price on his head, so he grew a beard, disguised himself as a soldier, and worked in an upper room in the Wartburg castle for two years to get it done.

Everything Luther did was centered on the Bible and the message of grace that he found there.  The battle cry of the Reformation was the phrase, “Word Alone, Christ Alone, Grace Alone.”  Most of all Luther wanted to teach the message of God’s love and forgiveness and gift of salvation won for us through the life, death, and resurrection of Jesus.  The book of Romans became a central text for Luther, with its clear descriptions of salvation by God’s grace alone through Christ Jesus.  In chapter three Paul wrote, “This righteousness from God comes through faith in Christ Jesus to all who believe, for there is no difference; all have sinned and fall short of the glory of God, and we are justified freely by his grace through the redemption that came by Christ Jesus….”, and then in verse 28, “So we maintain that a person is justified by faith apart from observing the Law.”

These were the very words that changed Martin Luther’s whole understanding of Scripture, and then through him, God changed the church.  The message of this passage led Luther back to the central message of God’s freely given grace.  In his desperate search for peace with God, he found in this passage that he could take comfort in God, instead of God being the primary cause of his discomfort and fear and despair.  For the rest of his life, he proclaimed that Good News in whatever way he could, and he was a man of great energy and many talents.  As a Biblical scholar, he argued convincingly for the truth of this understanding of the Gospel.  As a historian and theologian, he showed the Roman Catholic church that this had indeed been their own theology for many centuries, but over time had been obscured.  As a linguist, he translated the Bible into the language of the people, so they could read the Good News for themselves.  As a musician he wrote hymns, produced a hymnal, and introduced congregational singing to the worship service.  And as a powerful preacher, he proclaimed the Law and the Gospel to everyone, from kings on down to the lowest servants.

Luther proclaimed the Gospel most clearly in his explanation to the second article of the Apostle’s Creed where he wrote:  “At great cost, Jesus has saved and redeemed me, a lost and condemned person.  He has freed me from sin, death, and the power of the devil, not with silver and gold, but with his holy and precious blood and his innocent sufferings and death.  All of this he has done so that I might be his own and live with him in his Kingdom, and serve him in everlasting righteousness, innocence, and blessedness.”  Our salvation is through Christ Alone, said Luther, based on the Bible, the Word Alone.  And how do we get in on this salvation? By Grace Alone, he said in his explanation to the third article of the creed where he wrote:  “I believe I cannot by my own understanding or effort believe in Jesus Christ my Lord, or come to him.  But the Holy Spirit has called me through the Gospel, enlightened me with his gifts, and sanctified and kept me in the true faith.”  And then that second part of the Small Catechism concludes with God’s eternal promise, or, as Luther describes it in these words:  “On the last day, God will raise up me and all the dead, and give me and all believers in Christ eternal life.  This is most certainly true.”