I once heard of a church called the “Community Church of Joy.”  Churches used to be named after saints, like St. John’s or St. Paul’s; or, after our Lord, like Christ Lutheran, or Our Savior’s Lutheran Church.  But it’s a relatively recent development to name a church after an emotion.  There is nothing bad about the word joy, and nothing wrong with being joyful.  One would hope that there would be a certain amount of joy in being a Christian.  And we all love that old Christmas carol ‘Joy to the World.’  And,  joy is a good Biblical word, appearing in one form or another 63 times in the pages of the Bible.

But I don’t think I would want to join a church called the Community Church of Joy.  That would be a tough name to live up to.  I don’t know anything about the people in that town where the Community Church of Joy is located, but in all of the towns I’ve lived in, the people were not always joyful, and I know that I’m not always joyful.  And I don’t know how it goes in your church, but in all the congregations I have ever been in, some people could even get a little crabby once in a while, and I get crabby sometimes, too.  Emotions come and go, changing back and forth, for all of us; so naming a church after just one emotional state seems to me to be a little dangerous.  I have heard that in marketing it is best to “under-promise and over-deliver.”  Advertising yourself as a community church of JOY might be promising a little more than any church can deliver on a regular basis.

Not only that, but if you look through the Bible you will find that the emotion of joy, though mentioned 63 times, is not the predominant emotion.  Actually, people in the Bible are far more often described as fearful than as joyful.  Whereas the words joy or joyful or joyous appear 63 times, the words fear or fearful or afraid appear over 500 times.  And in many of those times that people are experiencing the emotion of fear, it is because GOD, or an angel of God, has appeared to them.  Good old God, our friend and heavenly Father, our shepherd, guide and protector; God, or his angels, are always scaring the daylights out of someone.  That is what happens almost every time God appears to anyone in the Bible.

Think about that.  Church is the place where we gather each week to worship God and come into his presence.  God is always with us, of course, but there is something special about the weekly service when we gather before him to hear his Word and offer our prayers.  And in the Bible, whenever people find themselves in the presence of God, the very first thing they feel is fear.  So really, if you were going to name a church after an emotion, it would be more accurate to name it the Community Church of Fear (though from a marketing standpoint that would probably not be a very good name for a church either).

Consider just two examples of such fear, from two of the most important Bible stories of them all.  The first is from the story of the birth of Jesus in Luke two where it says: “And there were in the same country shepherds abiding in the field, keeping watch over their flocks by night. And, lo, the angel of the Lord came upon them, and the glory of the Lord shone round about them: and they were sore afraid.”  The glory of the Lord shines all around them, and they are afraid.  How afraid are they?  They were ‘sore’ afraid, says the King James Version– so afraid that it hurt.

The second story is the Easter morning resurrection of Christ.  The women went to the tomb to prepare the crucified body of Jesus for a proper burial.  But instead of a corpse, they found an angel of God announcing that their friend and Master Jesus was not dead but was risen from the dead and alive and would soon be meeting them.  So are they then filled with joy?  No.  The Gospels tell us they are afraid, filled with fear, bewildered, and trembling.

But there is always more to the story.  The God whose very appearing elicits such fear, quickly speaks to calm that fear.  To the shepherds who are ‘sore afraid,’ the first words of the angel is “Fear not, for behold I bring you good tidings of a great joy.”  The words of the angels to the women at the empty tomb are, “Be not afraid.  Why do you seek the living among the dead?  He is risen.”

In neither of these stories are the people told to be afraid.  Fear was a logical response in those situations, and fear is a reasonable response to our own situation as we live in this uncertain world.  Whether or not God or his angels are appearing to you, there is much to be afraid of.  The doctor comes in after your physical and says, “There’s a problem and we need to take some tests; I am concerned about something we saw on your X-ray.”  What do you feel?  You feel fear, and that fear comes from an unexpected, unwanted disruption in your routine, in your way of seeing things.  You are used to living day after day.  That has been your routine.  You are used to seeing things from the perspective of life.  But now all of a sudden, there is a chance that the routine may be broken, and that there may not be any life; and you are afraid.  Fear is a reasonable response to many situations, and that fear can be a good thing if it moves you to put your faith in the One who can help you.

Little children have to be taught to be afraid of going out into the street.  Parents tell their small children in the firmest possible language, “The street is a dangerous place.  Do not even think about crossing it unless I am with you and holding your hand.  The street and the cars in it are very dangerous.”  Fear of going out into the street is a good kind of fear for a small child to have.  You have to worry about a child who has no fear of anything.  Far better is it when the child knows enough to fear what needs to be feared, and knows enough at those times to trust in the care and leading of someone bigger than himself.

“Do not be afraid,” Jesus would say to his disciples, oftentimes adding, “For I will be with you.”  A child crossing the street will be all right if holding on to the hand of someone big enough and wise enough to know what to do in traffic.  And we too will be all right, no matter what we must face, even if it is crossing from over from this life to the next.  We will be all right, if we hold on to and trust in the one who can handle even death.

Tomorrow we begin a new year.  We have many reasons to be afraid, but God says, “Fear not.”

Isaiah 41:10  —  So do not fear, for I am with you; do not be dismayed, for I am your God.  I will strengthen you and help you; I will uphold you with my righteous right hand.

Psalm 46:1-2  —  God is our refuge and strength, an ever-present help in trouble.  Therefore we will not fear, though the earth give way and the mountains fall into the heart of the sea.

Even though I walk through the valley of the shadow of death, I will fear no evil: for You are with me. 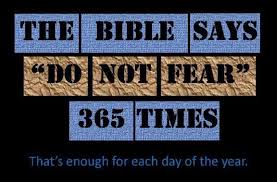