Dear friends, do not be surprised at the fiery ordeal that has come on you to test you, as though something strange were happening to you.   But rejoice inasmuch as you participate in the sufferings of Christ, so that you may be overjoyed when his glory is revealed.  –1 Peter 4:12-13

(…continued)  Nero was not able to eliminate the Christian community in Rome.  In fact, it grew stronger in the face of persecution.  The faith of the believers was not only strengthened, but the church grew in numbers by doing as their Lord commanded– returning good for the evil that had been done to them.  They were given many opportunities to do so.

Crowded and unsanitary conditions in ancient cities, along with a lack of understanding of how germs spread illness, made disease a constant threat.  Sometimes, diseases would spread out of control, and plagues could wipe out half of a city, or even half of a nation’s, population.

Several decades after Nero, one of the worst of such plagues hit Rome.  The wealthy immediately fled to their country estates.  Even the less wealthy often fled, heading to the country to take their chances at living off the land rather than face the prospect of dying a horrible death by small pox.  Victims would begin by having a high fever, then there would be severe back and stomach pains, and then vomiting.  Then would come the ‘pox’– open, running sores all over the face, down the throat, into the eyes, and over the hands and feet.  There was no treatment in those days, and it was very contagious.  Families would flee the city, leaving their sick loved ones behind, rather than risk also getting the disease.

But the Christians of the city did not flee.  They stayed behind to care for their own loved ones, and then also for those who had been left behind by others.  They would go through the city with carts, picking up the sick and dying, and taking them back to makeshift hospitals.  There they would do their best to keep them comfortable in their last days.  Many of the Christians, having been exposed to the pox, also got the disease and died.

Soon it became apparent that not everyone would die.  Even with minimal care, some would recover; and much to the surprise of their loved ones, were still alive when they returned.  This love and service and self-sacrifice by the Christians had a profound effect on people, and many joined the Christians.  Such courage in the face of death also bore witness to the Christians’ belief in the resurrection from the dead.  By acting on the commands of Christ, without regard for their own welfare, this small Christian group unexpectedly became the dominant cultural group. 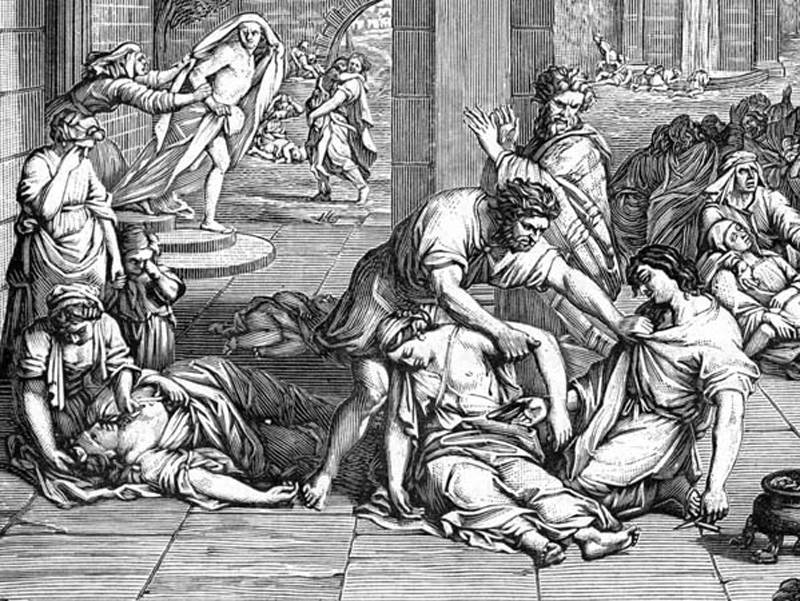 Chaos and death in the streets during the plague.

Peter’s encouragement to be faithful even in the face of suffering and death bore much fruit in the early church.  He was, in fact, only passing on what he had learned from Jesus himself who had said, “Whoever seeks to save his life shall lose it, but whoever loses his life for my sake, shall find it.”

The Romans, fleeing the cities during the plague to save their own lives, were part of a dying culture.  But the Christians, willing to stay even if it meant losing their own life, would continue to live and grow and spread around the world, long after the glory of the Roman empire had come to an end.

Mark 8:34b-36  —  (Jesus said), “Whoever wants to be my disciple must deny themselves and take up their cross and follow me.  For whoever wants to save their life will lose it, but whoever loses their life for me and for the gospel will save it.  What good is it for someone to gain the whole world, yet forfeit their soul?”

Revelation 14:12-13  —  This calls for patient endurance on the part of the people of God who keep his commands and remain faithful to Jesus.  Then I heard a voice from heaven say, “Write this:  Blessed are the dead who die in the Lord from now on.”    “Yes,” says the Spirit, “they will rest from their labor, for their deeds will follow them.”

Lord, teach me to be generous.
Teach me to serve you as you deserve;
to give and not to count the cost,
to fight and not to heed the wounds,
to toil and not to seek for rest,
to labor and not to ask for reward,
save that of knowing that I do your will.